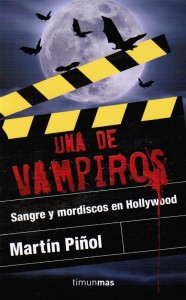 Finally the new novel by Martín Piñol has been published in Spanish by Timun Mas/Planeta and is in the bestselling lists since the first week!  Una de vampiros is the original title, but according to the author, the title in English should be Hollywood Bloodlevard.

The plot: Costales, a guy from Barcelona in his thirties, selfish and carefree, is sent to Hollywood to take care of a depressive film student. But the day Obama would become the US president, the student is kidnapped by a group of vampires who are shooting a snuff movie. Helped by a homeless ex-marine eager to revenge, Costales has only twenty-four hours to face all sorts of obstacles, pretentious actors and many other alike beings and find his friend.

Martín Piñol is once again writing for young readers but also for any reader willing to spend a good time with a book. Humour and pure entertainment are assured!

A 3 minutes presentation by the author himself here (this video has reached more than 9,500 views in YouTube in a few days).

And one of the many enthusiastic comments from booksellers and readers published in blogs and magazines here.

All translation and film rights are available at Pontas Agency: