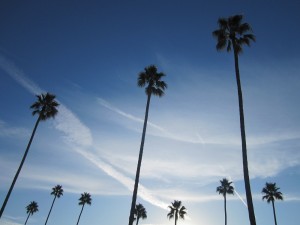 The American Film Market 2011 opened on November 2nd in Los Angeles for eight days and Anna Soler-Pont attended again on behalf of Pontas in the aim to keep enlarging and strengthening the contacts in the film industry. She had a full schedule of meetings in Santa Monica, Beverly Hills, West Hollywood and other places around the big city, mainly with producers interested in acquiring the film rights of literary properties represented by Pontas and with possible partners for international co-productions Pontas is currently developing and packaging.

The “occupy movement” reached Culver City, where Anna had several meetings at the Sony lot. And also at the very first lot, known as “The Lot” in the Hollywood film industry built in the 1920s and where Charles Chaplin, who produced most of his films, had his office (in the photo with the new car of Clesio Ferreira, the most efficient Brazilian taxi driver to attend meetings around Los Angeles on time!).

Two producers with whom we hope to collaborate one day: Ilda Diffley at Echo Lake Entertainment andJeff Kleeman at Kate Mantilini’s restaurant, where some scenes of Michael Mann’s Heat  with Al Pacino and Robert de Niro were shot.

From left to right: Randee Bieler (author of Quilt, a wonderful novel about an African woman and mother slave in the Southern United States), Anna, Thomas Minkus (from the Frankfurt Book Fair) and Susan Cooper (producer from Blue Engine Entertainment). And Josh Radnor listening to the comments after a private screening of Liberal Arts, his second film in post-production, again written, directed and performed by himself (like it was the case in Happythankyoumoreplease).