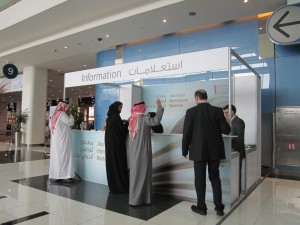 The Abu Dhabi International Book Fair took place from 2-7 March 2010 to bring together over 823 exhibitors from more than 63 countries from across the world. Besides the publishing business going on, the fair organised a cultural programme with more than 150 workshops and readings with international authors and a professional programme including very interesting pannels and matchmaking sessions.

“Agents: how do they operate, how to cooperate” was the title of the pannel in which Anna Soler-Pont was invited to participate at. She was able to explain to a large audience her experiences and how do thePontas Agency work internationally as a bridge between cultures, authors and publishers, books and films.

Kalima, the translation initiative of the Abu Dhabi Authority for Culture and Heritage (ADACH) announced the launch of a new mechanism called “Bridges” to establish an interactive platform between Arab and international publishers participating at the fair. This initiative is intended to promote intellectual property rights through encouraging access to rights to translate works and publishing them in Arabic in accordance with international standards.

From left to right: Musab Ibrahim and Saoud Al Shehhi from the Kalima team; Haissam Fadel (publisher of the Arab Cultural Center in Morocco, who just launched Stephanie Meyer’ s four novels in Arabic and will publish the first Millennium title by Stieg Larsson in a few weeks) with Benita Edzard (foreign rights director at Robert Laffont in France).

And with Qais Sedki, winner of the Sheikh Zayed Book Award for the first Arabic language manga, at the official photo call.