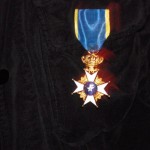 On the 21st of January 2010, Marc de Gouvenain was awarded the badge of Knight First Class of the Swedish Order of the Polar Star.

The ceremony took place at the Swedish ambassador’s residency in Paris, where on behalf of his Majesty Carl XVI Gustaf, King of Sweden, Mr. Per Holmström ministre plénipotentiaire, from the Swedish Embassy in Paris held a speech retracing the career of Marc as a translator and publisher of Swedish literature into French since 1969. (photos © Pascale Chaplain)

Created by King Frederick I of Sweden in 1748, the Order of the Polar Star was until 1975 intended as a reward for Swedish and foreign "civic merits, for devotion to duty, for science, literary, learned and useful works and for new and beneficial institutions". Its motto, in latin, is, and can still be seen on the blue enameled centre of the badge, Nescit Occasum, which means "it knows no decline".