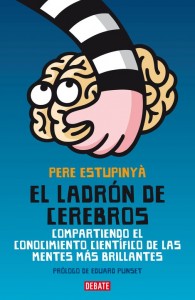 According to Pere Estupinyà, Science is the most fascinating adventure that you can set out on.

Pere Estupinyà (Tortosa,1974) is a Chemist and Biochemist that after a short stage as a PhD researcher moved to the field of Science Journalism. He has been the editor of “Redes”, the most influential Spanish television program on Science, and lecturer in Science, Technology and Society at the Ramon Llull University. In 2007-2008 he spent one academic year at the Massachusetts Institute of Technology and Harvard University as a Knight Science Journalism Fellow at MIT. He writes about science for different Spanish magazines, collaborates on radio programs, gives conferences, and owns an acclaimed scientific blog in El País: Apuntes Científicos desde el MIT.

He currently lives in Washington DC, working at the National Institutes of Health, and writing as a freelance journalist for different Spanish and US media and institutions.

Last November 2010, Pere Estupinyà’s first book, The Brain Thief, was published in Spanish by Debate (Random House Mondadori) and it´s already being reprinted –in the photo below, the author and his Spanish publisher, Miguel Aguilar. And  these first days of January 2011, it has been published in Catalan by La Magrana.

In The Brain Thief Pere Estupinyà infiltrates the most important laboratories and investigation centres of the world to steal the knowledge of the real heroes of the 21st century – the scientists – and share it with his readers.

Through the entertaining stories of the book, the reader doesn’t only get into the hottest debates of neuroscience, cosmology, genetics, human psychics and climate change. The Brain Thief also follows the flow of a virus through the body, scans his brain to see if he can detects his own lies, digs deep down into the conflict between science and religion and creationism, gets his hormones to explain why you fall in love, understands why women’s pupils dilate during orgasm, finds the origin of superstition, analyses why there are more mistakes in magazines such as Science and Nature than in less recognised ones, goes crazy trying to understand antimatter and quantum entanglement, and observes electricity that flows without wires. A truly interesting and entertaining book that is not only for scientists but for everybody.

The media coverage has taken Pere Estupinyà even to TV talk shows such as Buenafuente’s (an icon in Spanish and Catalan televisions). See a part of the interview here.

All translation rights available at the Pontas Agency: anna@pontas-agency.com