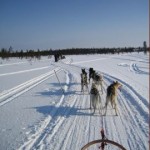 For everyone working in the publishing industry, “Frankfurt” means only one thing: the International Frankfurt Book Fair. The most important event to attend every year and the most important content market in the world. This 2011 is Pontas ’ 20th Frankfurt Book Fair! And five people from the Pontas team will be there: Anna Soler-Pont, Carina Brandt, Anna Ascolies, Patricia Sánchez and Elisa Basolu.

Just before Frankfurt we are happy to announce that we have sold French rights of Olivier Truc ’s novel, Le dernier lapon (The last of the Sami)  to Anne-Marie Métailié at Éditions Métailié and Italian rights to Francesca Varotto at Marsilio. While many other editors from publishing houses in other countries should be taking a decision soon too!

Film rights of Les visagés écrasés by Marin Ledun (at Éditions du Seuil) have been finally acquired by French producer and filmmaker Jean-Paul Lilienfeld for Junior Productions, while the novel is shortlisted for a good number of awards in France and is doing very well in Spain (published by Alienta Editorial/Planeta).

The World English language rights of The Hundred Year Old Man Who Climbed Through the Window and Disappeared  by Swedish author Jonas Jonasson have been acquired by Hyperion in the US and Hesperus Press in the UK. It is already published into ten languages and we look forward to sell the remaining translation rights (Korean, Japanese and a few more) while several Hollywood studios are discussing the remake rights with Nice Entertainment, to whom we sold film rights.

Mornings in Jenin by American-Palestinian author Susan Abulhawa, a great success in many countries such as Norway and Italy, will be finally published in Arabic language next month by Bloomsbury Qatar.

Zinat Pirzadeh has become a new Pontas client. Born in 1967 in Iran, she is exiled in Sweden since more than twenty years ago. Her book, Butterfly on a Leash has just been published in Swedish by Piratförlaget and all translation, as well as film rights, are available.

And Gabi Martínez has asked the Pontas Agency to represent him and sell translation and film rights of his new bookSólo para gigantes (published in Spanish at Alfaguara and in Catalan at Amsterdam). At the launch of the book in Barcelona, John Carlin (whose book was adapted into the film Invictus) praised the book.