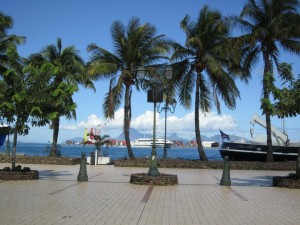 “Lire en Polynésie” (Reading in Polynesia) is an annual event set in Papeete, on Tahiti Island. It is the occasion for local publishers to meet their audience of readers but also for their association (APTI) to invite writers from Oceania, France and other countries around the world. This year the theme was “Nature” and among others were present Pascal Dessaint, Paul d’Arcy or Pete Fromm. Hence a number of very interesting panels like the universe considered through Polynesian mythology and modern astrophysics, the Pacific ocean and Polynesian seafarers, but also e-editing, new energies, threats of sea level rising on atoll populations… An interesting program indeed.

Marc de Gouvenain, as the last three years, was present, invited by APTI, for his knowledge of the local context regarding publishing, ready to be moderator for some panels and flagbearer of “Lire en Polynésie” in the local medias, although it was also covered by Le Monde.

In the photos: Marc moderating a panel with Simone Grand and Jean Adouze; and with Pascal Dessaint and others at RFO’s radio program « Le Grand 8 ».

Attending such events Pontas can develop its network in Oceania, already representing writers like Maori author Alan Duff  or Aboriginal Australian Philip McLaren and publishers like Au Vent des Îles, where Marc’s last novel Le témoin des Salomon came out five years ago and publisher of Polynesia’s most acclaimed writer: Chantal Spitz (in the pictures below, Chantal with Christian Robert, publisher of Au Vent des Îles; their stand; the closing ceremony and the Tahiti lagoon).