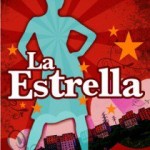 September 29th  2011 was an important day for Belén Carmona: her novel La Estrella (published in Spanish by Ediciones B) was launched in her home town, Santa Coloma de Gramenet (on the outskirts of Barcelona), at the same time as the shooting of the film adapting the book was going on. Belén Carmona is the co-screenplay writer of the film together with Alberto Aranda, the director. And the main casting attended the event: Ingrid Rubio, Carmen Machi and Marc Clotet. At Pontas we’ve been following the film adaptation process since we sold the rights four years ago and we are happy to see both, the novel and the film, reaching the audience at last!

Is not easy to summarize such a novel, which is read like listening to a rumba or watching a flamenco master class… La Estrella is the story of Estrella, an ill-treated woman who discovers in flamenco a way to be heard, a way to look at herself, a way to dance to the beat of her waking heart and to take the reins of her own happiness. La Estrella is a woman who wanted to be successful in the Spanish TV program Gente Joven (‘Young People’) in the 80s but she didn’t make it. She has often thought she’s found ‘the one’, but it’s always ended in disappointment. She is sick of being ill-treated by men and by life, and now she’s choosing to be happy. Her journey is an encouraging flamenco-rumba-story in the here and now, with a finale on the 12th beat of flamenco time. Stamping her heels with flamenco charm, the cleaner at the Santa Coloma’s morgue will turn unexpectedly into “Santaco’s Star”. And the more than 80 nationalities that call Santa Coloma de Gramenet (a town on the outskirts of Barcelona) home, clap their hands for her.Belén Carmona deals with the subjects of violence against women and of the coexistence of cultures, all the while seeing the bottle half full and embracing humour and compassion and witnessing the mending of her heart through the flamenco classes run by the gypsy dancer “La Tani”. In the pictures: Carmen Machi, La Tani, Ingrid Rubio, Marc Clotet, Belén Carmona, Núria Parlón (mayor of Santa Coloma) and other guests talking about the book and its adaptation.

The neighbourhood where the novel and the film are mainly set (and where Belén Carmona grew up).

Carmen Machi, Ingrid Rubio, Muchachito (a singer from Santa Coloma who plays in the film) and Fele Martínez on set; and Marc Clotet during the shooting.

Belén Carmona has a Bachelor of Journalism from the Universidad Autònoma de Barcelona (UAB) and a postgraduate in New Techniques of Information and Communication from the Universitat Pompeu Fabra (UPF). Belén is also especialized in the Management of Multicultural Projects and Fundraising. She has worked for Amnesty International promoting the role of the arts in the defense of human rights in the world. La Estrella is her second novel and the first to be adapted for the big screen by A Contraluz Films. www.belencarmona.blogspot.com More information: Anna Soler-Pont – anna@pontas-agency.com