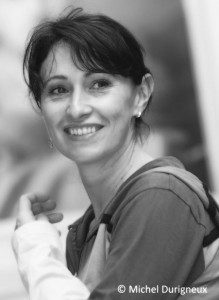 At Pontas we are always open to represent new interesting clients from all over the world with stories to be spread internationally and adapted for the screens. After having reached representation agreements with several Scandinavian authors, now we are happy to be enlarging our list with French authors!

Ingrid Astier is passionated both by literature and cuisine. A real perfectionist, she is the author of several books on cooking, artists fascinated by cuisine and noble products like tea, chocolate or vanilla. But Ingrid’s “interest in people’s bodies” directed her also to writing novels, namely a trilogy in which the important characters are the river Seine and the River Police, a very little known police squad specialized in - literally and symbolically - diving in the most unpleasant waters. The first part, Quai des Enfers (Éditions Gallimard, 2009) was unanimously praised by the critics and the noir milieu and Ingrid is now finishing the second part,Angle Mort (Dead angle, to be published by Gallimard in March 2012). Following the Seine and subterranean channels, the River Police extend their activities to Paris suburbs and places where humanity’s basic instincts like survival at any means or hunting will encounter, via circus artists, the part of dream that remains in anyone, be him or her a criminal or a worn out homeless. To write these books, Ingrid has been for months in real immersion in the most dangerous zones she depicts.

Olivier Truc, a journalist since 1986 and based in Stockholm since 1994, he is currently correspondent forLe Monde (French daily) and Le Point (French weekly), worked also for Libération. His articles cover politics, economics and social affairs, immigration and refugees issues, features and portraits. He also produces tv-documentaries and two of them have been awarded. His last documentary film, The Reindeer Police, is about Norwegian policemen belonging to a special group trying to prevent conflicts connected to reindeer herding in Lapland. As a fiction author, Olivier Truc has already published the novel L’Imposteur (in French at Calmann-Lévy, 2006), and Dykaren som exploderade (in Swedish, together with Christian Catomeris, journalist at SVT Aktuellt, at Norstedts, 2008). Both books are based on personal stories, in-depth portraits and interviews. He has just finished a new novel.

Emmanuelle Urien published her first novel Tu devrais voir quelqu'un in 2009 at Éditions Gallimard. Before that, she had published several short stories collections (Toute humanité mise à part, Court,noir, sans sucre), radio plays and an erotic short story. Emmanuelle Urien is also a musician and a singer and she has just released a tri-lingual album called Glossolalies, among other artistic projects… Praised as a subtile writer but also as a cousin of noir authors because she doesn’t make concessions to people, Emmanuelle transcripts brilliantly and subtly ordinary people’s behaviours and breaks, the moment when someone takes a turn to unpleasant sides of a life. In her new novel,