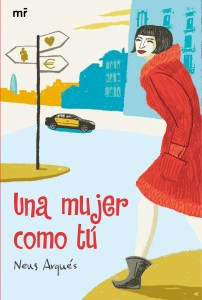 Una mujer como tú, the second novel by Neus Arqués, published by Ediciones Martínez Roca (Planeta), is already available in the Spanish bookshops! Our working title in English is A Woman in Your Positionbut some prefer A Woman like You...

Is it really better to be alone than in a bad relationship? Is motherhood mandatory? Are girlfriends true friends?

These are some of the questions arising while reading this story of women’s friendship in Barcelona: Ruth is back to the city after her father’s sudden death; and back in touch with Bel (married to her former boyfriend); Marta is obsessed with being a mother and Luisa is longing to be something more than a mother.

A Woman in Your Position speaks to 30 to 50-year old readers, for whom it sketches the new (Western and specially European) female archetypes --the maternity junkie, the dependent single, the self-questioning wife... A novel that joins four girlfriends in their winding road to personal fulfilment. With a fresh voice and a strong sense of dialogue, Neus Arqués dives fearlessly into our secret agendas and usesAlmodovar-like situations to present the reader with uncomfortable topics. Translation and film rights are available!

You can listen to all the songs starting every chapter in this sound track of the novel  that a blogger fan has compiled here.

Barcelona born and bred, Neus Arqués runs her own marketing agency (Manfatta) and keeps up with herblog. Discussing about writing, visibility in Internet, blogmarketing and new digital technologies with Neus is always a lesson of creativity and innovation and we are happy to represent her worldwide!

How fulfilling is sex without love? What happens to women when they reach that age where they become invisible to men? Tired of investing time and effort to attract men and on the advice from her beautician, Rosa resorts to no-strings attached sex and hires a gigolo. She dates Ivan, a Cuban man for hire, who has arrived in Barcelona searching for a new life. At the same time, Bel also meets Ivan, by night and by chance. They fall in love. For Bel, the relationship serves as a therapy to forget her former fiancé and to rebuild her self-esteem. Ivan swings between his customer and his girlfriend. On the other hand, Rosa and Bel question their own feelings. Where is this love triangle headed?

This would be the synopsis of A Man for Hire (Un hombre de pago), Neus Arqués’ first novel, already published in Spain (by Umbriel), Russia (by Centrepolygraph) and Portugal (Quidnovi) through the Pontas Agency. The completely different covers designed in those three countries, as well as the use of the Edward Hopper painting in book covers, have been subject of analysis in several blogs.