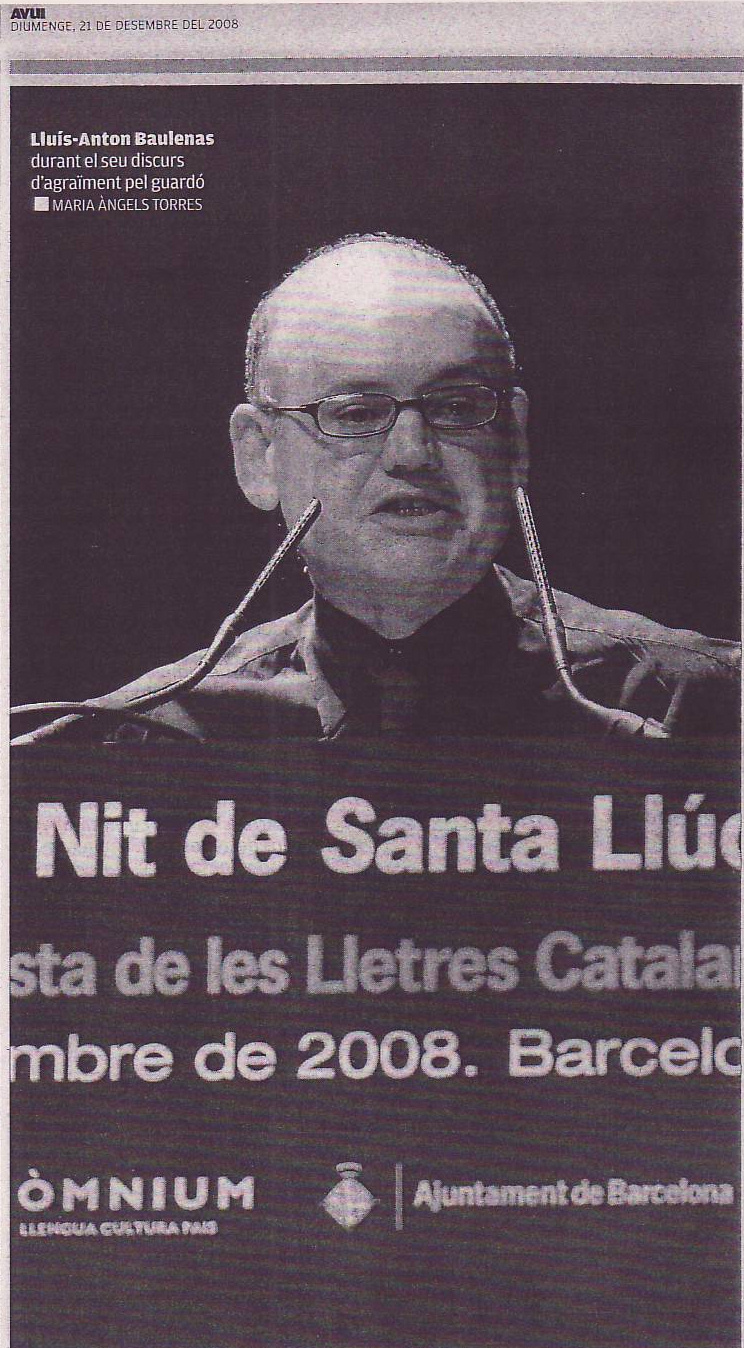 On Saturday December 20 there were good news for Catalan literature: Lluís-Anton Baulenas won the Sant Jordi Award, the most prestigious and best funded literary prize in the Catalan literary scene, for his latest novel El nas de Mussolini (The Nose of Mussolini), a historical novel set in 1920s.

El nas de Mussolini tells the story of Berta Panatis, a young communist activist who is given the order of murdering the General Primo de Rivera, the dictator who ruled Spain during the 20s, at a time when Mussolini’s fascist regime wielded a profound fascination all over Europe. Equipped with a gun loaded with six silver bullets, she hides in a small village of the Catalan Pyrenees to wait for the encoded telegram that will bring her the final instructions to carry out the assassination. But the telegram doesn’t arrive, and Berta begins to nourish profound doubts about the meaning of her mission. Simultaneously, she will start a sentimental relationship with Carlota, the post office’s head, actually an ex terrorist herself who is responsible for a failed attempt of killing Mussolini.

In the jury’s words, “El nas de Mussolini is a compelling insight into the mind of someone who is expected to kill for a noble cause and unfolds in a surprising and riveting plot that creates a most oppressive atmosphere”.

Previous winners of the Sant Jordi Award have been, among others, Baltasar Porcel, Jaume Cabré, Carme Riera, Emili Rosales or Pep Coll (also represented by Pontas!). Lluís-Anton Baulenas had already been twice finalist of the prize (in 1994 and 1996); he had previously won prizes as the Documenta, Carlemany, Prudenci Bertrana, and, most recently, the Premi Ramon Llull; winning this year’s edition of the Sant Jordi definitely confirms him as one of the most acclaimed contemporary Catalan writers!

The book will be published by Proa in February 2009. All translation and film rights are available!!

We do hope this novel will follow the success of other Baulenas’  fictions in translation. Per un sac d’ossos (For a Sack of Bones), published last June 2008 in the United States by Harcourt, is still getting amazing reviews; and is also already out in Polish by Wydawnictwo Literackie. Next year it will be finally published in Italy by Il Saggiarore and in the Netherlands by Signature, after the great success they had with Dutch translation of La felicitat (Het Geluk, Happiness), with more than 15,000 copies sold so far! Translation rights of La felicitat have been also sold in France, Brazil, Italy, Taiwan and Portugal.

Noms a la sorra (Noms sur le sable, Names in the Sand) was just published in France by Flammarion last month and is now having a great amount of readers in Spanish (published by Planeta).