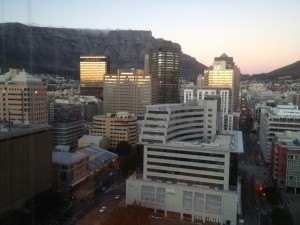 From June 12th to 14th, Marc de Gouvenain attended on behalf of Pontas the International Publishers’ Association Congress in Cape Town (South Africa). The International Publishers Association (IPA) is an international industry federation representing all aspects of book and journal publishing. Established in 1896, IPA's mission is to promote and protect publishing and to raise awareness for publishing as a force for economic, cultural and political development. Around the world IPA actively fights against censorship and promotes copyright, literacy and freedom to publish. For the first time, the 2012 IPA Congress was held on the African continent. The general theme of the Congress was "Publishing for a New Era".

With the opportunities and challenges of digital publishing, the slow recovery from the current economic recession, threats of state publishing and raging debates on copyright law and intellectual property rights, delegates had much to talk about and share information on. The programme covered topics  presented by leaders in their field, notably the Director General of the World Intellectual Property Organization (WIPO)Francis Gurry, world famous novelist Ngugi wa Thiongo, US Register of Copyrights Maria Pallante, or the CEOs of HarperCollins, Kodansha, and The Penguin Group. Marc de Gouvenain was invited as a speaker and participant to the session “Authors, translators and agents: towards a New Deal”. In the photos below, from left to right: Jens Bammel (IPA’ s Secretary General), Marc de Gouvenain, Niq Mhlongo (South African author) and Alistair Burtenshaw (Director of Publishing & Books, Reed Exhibitions, UK); and ostriches in Table Mountain National Park.

This panel and all the activities organized around the congress gave Marc a great opportunity to meet publishers from all over the world, authors and publishers from South Africa.The Congress ended with a celebration of freedom of expression by the 2012 IPA Freedom to Publish Prize winner Jonathan Shapiro. Congress resolutions, the traditional formal summary demands, concluded the event. Next IPA Congress will take place in Bangkok (Thailand) in March 2014. Right after the IPA Congress started the Cape Town Book Fair (from  June 15th to 17th) and Marc had also the chance to get to visit such event, established in 2006 to harness the momentum created by the Harare Book Fair and create another book fair that would fill the gap left by the discontinuation of the Harare Book Fair (Pontas had been registered at that interesting fair in Zimbabwe in 1993, 1996 and 1997 and we kept good memories and international contacts ever since!). In the photo below: the Cape of Good Hope.