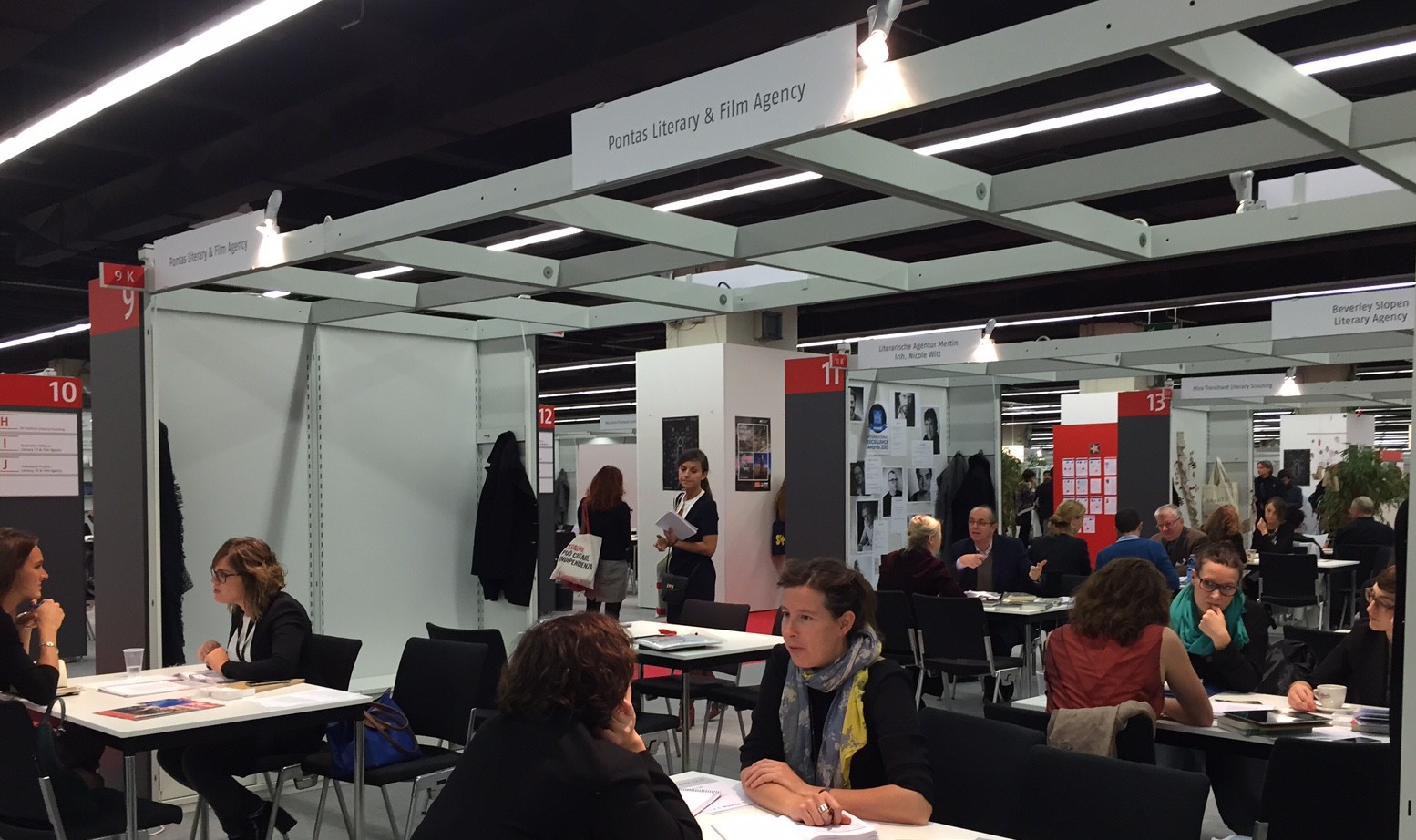 Every Frankfurt Book Fair is special and unique, so it was with the 2015 edition (which was the 24th Frankfurt Book Fair the Pontas Agency attended uninterruptedly). This year we also started on Monday with meetings in Coffee Fellows, the Frankfurter Hof and the Hessischer Hof hotels (although next year we’ll try to convince editors to meet us at the fair, in better conditions!). We increased our presence at the Agent’s Center with four tables, where Anna Soler-Pont, Marina Penalva, Jessica Craig and Maria Cardona had most of their meetings and fully packed schedules. We covered around 400 meetings between us and met with editors from 25 different countries, as well as many film producers and film scouts looking for literary properties to adapt. Our contract manager Guenny Rodewald attended too. Maria Cardona had the chance to be part of the two-week Frankfurt Book Fair Fellowship program and she strengthened our international network and knowledge of the German publishing industry.

One of the most special moments was meeting at last in person the Indonesian author Eka Kurniawan, who officially signed as a new Pontas client. He was in Frankfurt to participate in the programme of the Indonesia Guest of Honour yet even before this the international buzz about him and the strong reviews coming out of the US in the New York Times and The New Yorker announced that he is considered one of the most promising literary authors emerging in the world, as well as being recommended by Oprah Winfrey. Leila S. Chudori was also part of of the Indonesian programme and her novel Pulang (Home) caught the attention of German readers and media.

During the fair we could announce that the 20th translation deal was sold for the psychological thriller La última salida (The Last Way Out) by Argentinian author Federico Axat: the novel has been acquired by publishers in twenty languages six months before its publication in the original Spanish language (by Ediciones Destino in Spain, Planeta Argentina and Planeta México), something quite exceptional for an unknown and young Latin American author. In the picture below, Maria Cardona with Gabriel Sandoval, Editorial Director of Planeta México and Nacho Iraola, Editorial Director of Planeta Argentina.

Jessica Craig travelled to London before joining the rest of the team in Frankfurt to be next to Nigerian author Chigozie Obioma, whose novel The Fishermen was shortlisted for the Man Booker Prize 2015. In the end he didn’t win, but having been the only debut shortlisted is already very important for the future of his literary career. A toast for this brilliant debut took place during the fair with some of his international publishers (in the photo, Elena Lappin, editor of ONE/Pushkin Press and Jessica Craig).

Frankfurt represents the climax of the publishing calendar and the most essential gathering place where projects that we have been working on all year materialize. It is an unmissable event for agents, scouts, editors and booksellers and everyone who wants to be involved in the stories and pitches that will become bestselling books, films and cultural projects in the coming years. It is a place where long-term relationships, old friendships and tradition are as important for business as are new acquaintances, serendipity meetings and “firsts”.