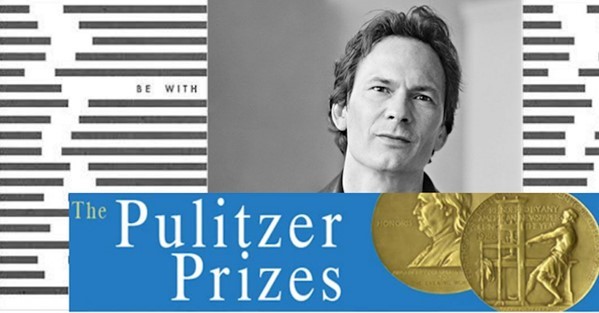 Forrest Gander has just been awarded the Pulitzer Prize for Poetry 2019 for his latest collection, Be With, published by New Directions. Also longlisted for the National Book Award for Poetry 2018, these elegiac poems were the subject of a rhapsodic article in the New Yorker.

Poet, novelist, essayist and Spanish translator Forrest Gander has previously been a Pulitzer Prize finalist with Core Samples from the World, a book blending poetry, essay and photography that was also a finalist for the National Book Critics Circle Award. His first novel, As a Friend, was published in North America by New Directions, translated into five languages and film rights sold. His second novel, The Trace, was also published by New Directions, translated into three languages and film rights sold.

Forrest Gander was born in the Mojave Desert and grew up, for the most part, in Virginia. Trenchant periods of his life were spent in San Francisco, Dolores Hidalgo (Mexico), and Eureka Springs, Arkansas. With degrees in both geology and English literature, Gander is the author of numerous books of poetry, translation, fiction, and essays. He’s the A.K. Seaver Professor of Literary Arts and Comparative Literature at Brown University. A U.S. Artists Rockefeller fellow, Gander has been recipient of grants from the NEA, the Guggenheim, Howard, Witter Bynner and Whiting foundations. His 2011 collection Core Samples from the World was an NBCC and Pulitzer Prize finalist for poetry.

Be With is A collection of elegies that grapple with sudden loss, and the difficulties of expressing grief and yearning for the departed. Drawing from his experience as a translator, Forrest Gander includes in the first, powerfully elegiac section a version of a poem by the Spanish mystical poet St. John of the Cross. He continues with a long multilingual poem examining the syncretic geological and cultural history of the U.S. border with Mexico. The poems of the third section—a moving transcription of Gander’s efforts to address his mother dying of Alzheimer’s—rise from the page like hymns, transforming slowly from reverence to revelation. Gander has been called one of our most formally restless poets, and these new poems express a characteristically tensile energy and, as one critic noted, “the most eclectic diction since Hart Crane.

Here below, from left to right, Anna Soler-Pont, Forrest Gander and Maria Cardona in the streets of Barcelona in September 2018. A pleasure to have him around.