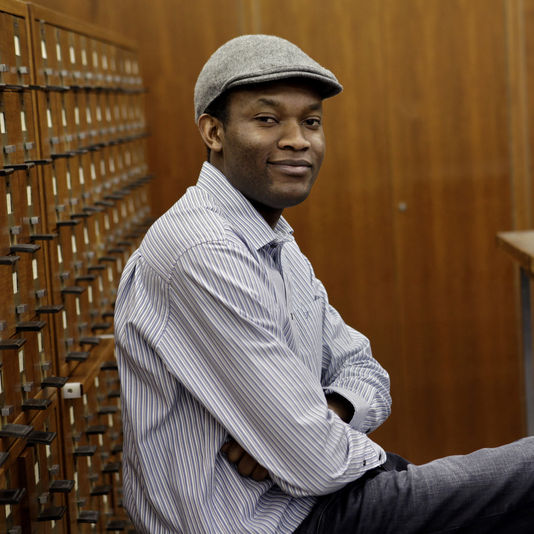 These last weeks the Pontas team has been busy reading and discussing what new clients to take in. And we are glad to announce the name of one of the authors we’ re proud to represent internationally: Fiston Mwanza Mujila.

Born in Lubumbashi (Democratic Republic of Congo) in 1981, Fiston Mwanza Mujila lives in Graz (Austria). He regularly participates in the literary activities organized in his home town, in Kinshasa, Nairobi or Brussels.
His writing has been awarded with numerous prizes, among which the Golden Medal in the sixth Games of the Francophony in Beirut, as well as the Best Text for Theater (Preizfür das beste Stück, State Theater, Mainz).
He says: « In my texts, I often practice the accumulation. I always wanted to be a saxophonist but it was not possible because in my region there was not a single jazz bar, not a single music school, not a single saxophone. Then I found myself alone with my words. When I write, I work with the words as notes, as if it was a partition. The writing is a way of saying the world. A text is polyphonic, there are several directions, several messages. »

Fiston Mwanza Mujila is now working in the final touches of his new novel, written in French and under the title Tram 83.

In an African city in secession, which could be Kinshasa or Lubumbashi, land tourists of all languages and nationalities. They have only one desire: to make a fortune by exploiting the mineral wealths of the country. They work during the day in mining concession and, as soon as night falls, they go out to get drunk, dance, eat and abandon themselves in Tram 83, the only night-club of the city, the den of all the outlaws: ex children-soldiers, prostitutes, blank students, unmarried mothers, sorcerers’ apprentices, …

Lucien, a professional writer, fleeing the exactions and the censorship, finds refuge in the city thanks to Requiem, a youth friend. Requiem lives mainly on theft and on swindle while Lucien only thinks of writing and living honestly. Around them gravitate gangsters and young girls, retired or runaway men, profit-seeking tourists and federal agents of a non-existent State.

Tram 83 plunges the reader into the atmosphere of a gold rush as cynical as, sometimes, comic and colorfully exotic. It’s an observation of human relationships in a world that has become a global village. It could be described as an African-rap or rhapsody novel or puzzle-novel hammered by rhythms of jazz.