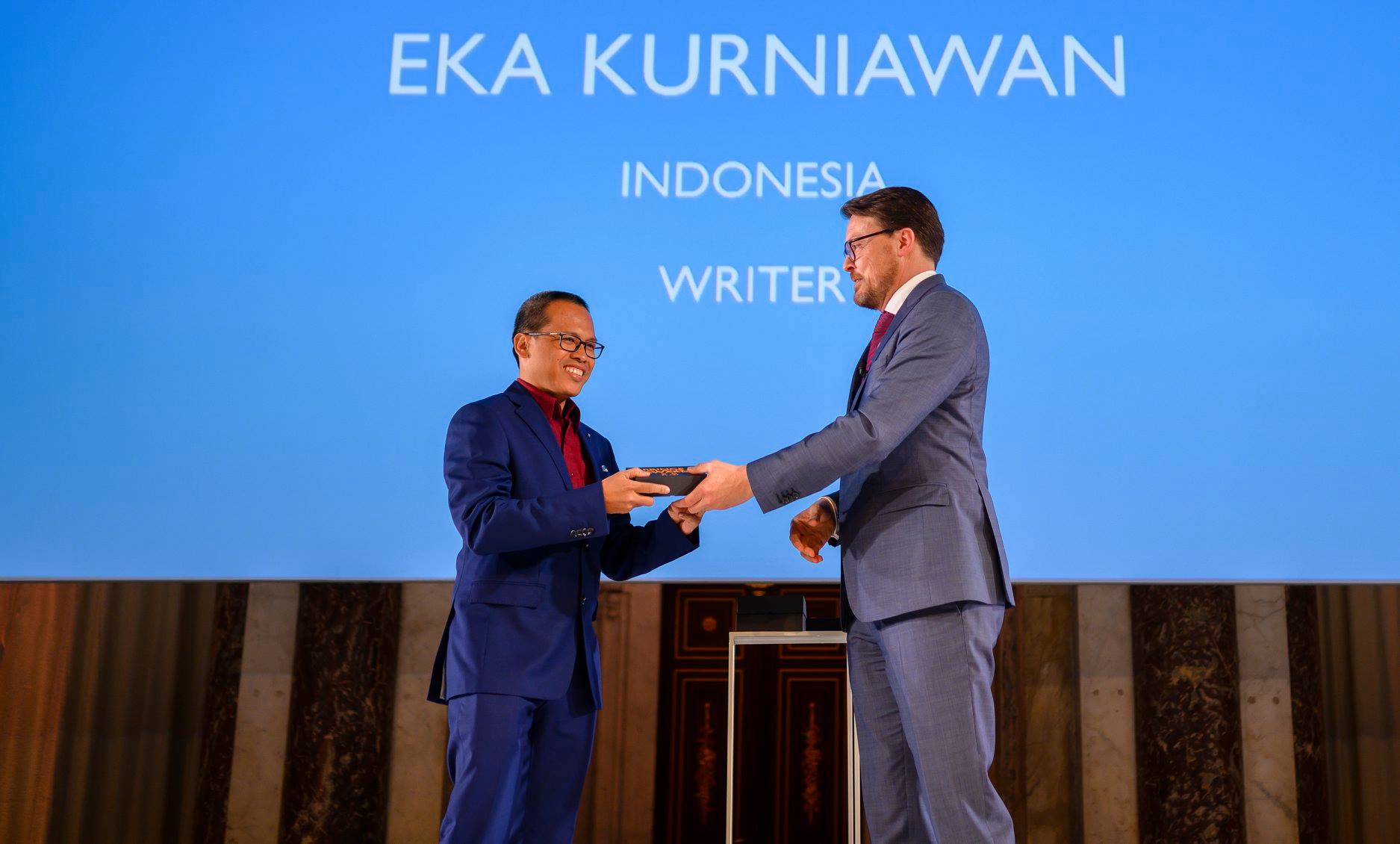 Eka Kurniawan received the Prince Claus Award 2018 on December 6th, 2018 at the Royal Palace in Amsterdam, together with six other laureates from different countries and cultural disciplines, in the presence of members of the Dutch Royal family and an international audience. The Prince Claus Awards, organized by the Prince Claus Fund, have been honouring outstanding achievements in cultural disciplines since 1996. The awards are given annually to individuals, groups and organisations, based mainly in Africa, Asia, Latin America and the Caribbean, whose work has had a positive impact on the development of their societies.

This year 2018, besides Eka Kurniawan, the laureates were Market Photo Workshop (a training institute and cultural platform from South Africa), Adong Judith (a playwright, film and theatre-maker from Uganda), Marwa al-Sabouni (an architect from Syria), Kidlat Tahimik (an artist and filmmaker from the Philippines), O Menelick 2º Ato (an independent journalism and cultural platform from Brazil) and Dada Masilo (a dancer and choreographer from South Africa). The photo below shows the laureates with some members of the Dutch Royal family and Prince Claus Fund board members just before the ceremony.

Eka Kurniawan was joined in Amsterdam by Anna Soler-Pont on behalf of the Pontas Agency (proudly representing him internationally since 2015), his translators from Bahasa Indonesia into Dutch, and the Ambassador of Indonesia in The Netherlands (in the photo below).

The day before the ceremony, a public event called “Louder than Words” was hosted by Thomas Erdbrink at the Compagnietheatre of Amsterdam, where the laureates told their stories. Eka had the chance to explain what Indonesia and literature mean to him and where his inspiration comes from.

Joumana El Zein Khoury, director of the Prince Claus Fund, said that “each of the laureates, in their own way, challenges people to think differently, to be open, to see history and culture in new ways.” Below you can see the laureates onstage at the Compagnietheatre.

According to the Prince Claus Fund, “Eka Kurniawan is a writer who explores Indonesia’s complex recent history through fiction. Kurniawan studied the great Indonesian writer Pramoedya Ananta Toer, but turned away from social realism and developed his own innovative style. His work has been compared with Gabriel Garcia Marquéz and Haruki Murakami. His first major novel, Beauty Is a Wound (2002), is both a hilarious satire and a family tragedy of epic scope that deals with rarely discussed topics: the physical and sexual violence of Indonesia’s Dutch colonial history, Japanese occupation and dictatorship and genocide under Suharto. His writing combines elements of local folklore traditions, oral histories, magical realism, Indonesian martial arts and horror comics to portray people’s multi-layered experiences. His novels, short stories, essays, movie scripts and graphic novels break through social barriers, reaching diverse audiences in an entertaining way with local stories that reveal terrible historical truths”.