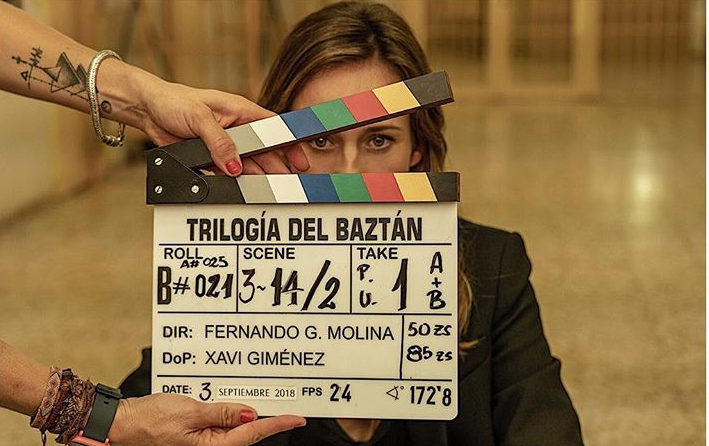 At the Pontas Agency, we’re always very active in promoting the novels of the authors we represent within film and tv producers, and now even more, with the bloom of streaming services everywhere and with more and more films and series being adapted from literary works.

Dolores Redondo‘s Baztan Trilogy is a great example, with The Invisible Guardian being premiered in cinemas in 2017 and available worldwide on Netflix. The second and third instalments of the trilogy, The Legacy of the Bones and Offering to the Storm, are currently being shot in Elizondo, and will be launched in 2019 and 2020 respectively. Dolores Redondo joined the cast and crew during the press junket organised in Elizondo during a shooting day (in the photo below).

Permission, Saskia Vogel’s debut novel, will be published in March 2019 in the UK (Dialogue/Little, Brown) and in May 2019 in North America (Coach House Books) but it has already been optioned by a London-based producer, currently under development to become a tv series to be shot in Los Angeles. Both novels by Carl Nixon, The Virgin and The Whale and Rocking Horse Road are now optioned by South Pacific Pictures Limited to develop feature films, most probably to be shot in New Zealand.

Jorge Zepeda‘s successful thriller set in the Tour de France, The Black Jersey, has been optioned by a French production company to produce a limited TV-series based on the gripping whodunit. Federico Axat's new psychological thriller, Amnesia, has also been optioned to be adapted into a TV series. And film rights La hora de despertarnos juntos (The Hour of Waking Together) by Kirmen Uribe are sold to Txintxua Films and a feature film is under development.

These are some of the recent deals concluded for films or tv series adapting novels. For confidentiality reasons, we can´t always tell the names of the producers behind each project. We can’t wait to go to more red carpets with Pontas authors soon!