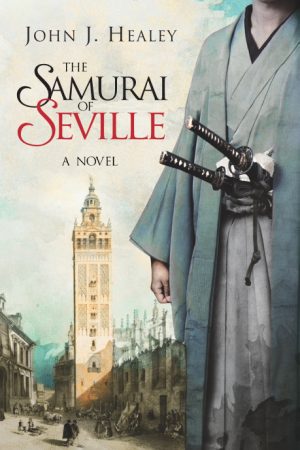 The Samurai of Seville

A sumptuous novel inspired by one of history’s most intriguing forgotten chapters—the arrival of Japanese Samurai on the shores of Europe.

In 1614, forty Samurai warriors and a group of tradesmen from Japan sailed to Spain, where they initiated one of the most intriguing cultural exchanges in history. They were received with pomp and circumstance, first by King Philip III and later by Pope Paul V. They were the first Japanese to visit Europe and they caused a sensation. They remained for two years and then most of the party returned to Japan; however, six of the Samurai stayed behind, settling in a small fishing village close to Sanlúcar de Barrameda, where their descendants live to this day.

Healey imbues this tale of the meeting of East and West with uncommon emotional and intellectual intensity and a rich sense of place. He explores the dueling mentalities of two cultures through a singular romance; the sophisticated, restrained warrior culture of Japan and the baroque sensibilities of Renaissance Spain, dark and obsessed with ethnic cleansing. What one culture lives with absolute normality is experienced as exotic from the outsider’s eye. Everyone is seen as strange at first and then—with growing familiarity—is revealed as being more similar than originally perceived, but with the added value of enduring idiosyncrasies.

The story told in this novel is an essential and timeless one about the discoveries and conflicts that arise from the forging of relationships across borders, both geographical and cultural.

«You just want to read it in one sitting.» Babelia, El País

«Using a lean, concise narrative style ... this story presents an absorbing view of the society of 17th-century Spain through a number of characters’ perspectives, conveying the spirit of the land and the essence of each vivid character enmeshed within a larger web of relationships and interests.» Historical Novel Society