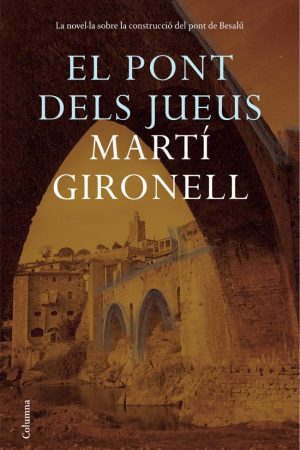 The Bridge of the Jews

Martí Gironell’s debut novel takes place in the author’s hometown, the famous medieval settlement of Besalú in northern Catalonia, during the construction of its most important monument: the medieval bridge.

The Municipal Council of Besalú commissions Pedro Baró, a builder from Perpignan, to rebuild the bridge in 1316. He accepts and begins the project. However, he is given an anonymous book detailing the circumstances of the original construction of the bridge by Prim Llombard in 1074.

This book is written by Prim’s son Ítram, who is living with his father and moves to Besalú to help build the medieval bridge when Prim is commissioned by the Count of Besalú. It is not to be a bridge for crossing, but for fortifying and defending the town. Although the inhabitants see this bridge as God-given fortune for their town, soon enough the project encounters obstacles that delay and even halt progress: once, a siege by the Count of Empúries; on another occasion, the ambition of a priest named Father Florenci who aims to destroy the plans and seize the county.

The conspirators in this plot will use all they have – both natural and supernatural powers – to strike their opponents and achieve their goal. With the defendants confined to the Jewish quarter, the Jews become their natural allies.Ítram, only fifteen at the time, gains access to the secret world of the Jews without knowing that this will play an important part in the liberation of Besalú. He also meets Jezabel, a sweet Jewish girl with whom he ends up falling in love, marrying and having children.
Both thrilling and evocative, The Bridge of the Jews takes readers on a journey into the Middle Ages, immersing them in the sorrows and joys of the characters, their victories and defeats.

The Bridge of the Jews is also a bridge between two cultures, two religions, two perspectives: the Jewish and the Christian. Yet even in this tumultuous time, the two main characters, Ítram and Jezabel, learn that they have more in common than they thought.
Village intrigue and power struggles between local nobility make this novel a highly gripping read.