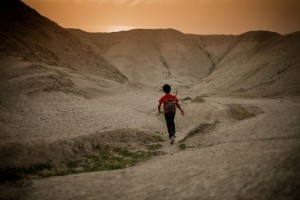 We are glad to announce that Pontas will be selling international distribution rights of When I Saw You (Lamma Shoftak), the new film by Palestinian filmmaker Annemarie Jacir, at the Cannes Film Market – Marché du Film de Cannes 2011 !

The film, written and directed by Annemarie Jacir, is currently shooting in Jordan and produced by Philistine Films. The main cast: Ruba Blal, Saleh Bakri and Mahmoud Asfa.

It’s the 1960s, and the world is alive. Tarek, 12, and his mother Ghaydaa live in Jerash Refugee camp in Jordan. They are part of a new wave of refugees from Palestine. They have been separated from Tarek’s father.Tarek has high-functioning autism and is full of energy, enthusiasm and warmth. Despite his disability, he is charming and funny with a sharp sense of humor. Tarek’s mother Ghaydaa works at the Women’s Center sewing clothes and struggles to support her son. Being alone to take care of Tarek has caused her to be serious and protective. Ghaydaa has long ago lost a sense of hope. She has been separated from her husband - the love of her life - to politics and war, to all the things she wants nothing to do with. All Ghaydaa wants now is to provide a good life for her son, to work, survive, and pray that she is reunited with her husband. Part of Tarek’s disability means he cannot understand why they are refugees, or why they can’t go back home. He doesn’t understand the concept of borders and limits. He himself has no boundaries. He is truly a free soul. And one morning, that free soul wakes up and decides to go back home… he must find his father.

Filmmaker and writer Annemarie Jacir has been working in independent cinema since 1994 and has written, directed and produced a number of award-winning films. Jacir premiered her first feature length film, Salt of this Sea, in 2008 as an Official Selection of the Cannes Film Festival, Palestine’s Official Oscar Entry for Best Foreign Language Film and Palestine’s first feature film by a female director. Salt of this Sea was sold to more than 30 countries. Among many other awards, Salt of this Sea won the prestigious FIPRESCI Critic’s Prize and Best Film in Milan’s Women’s Film. Jacir co-founded Philistine Films, an independent production company, focusing on productions related to the Arab world. Shecurrently lives in Jordan.

“Since I have not been able to return to Ramallah, my understanding of exile and of being torn from one’s home has taken on more dimensions and deeper meanings. Being so close by living in Amman has not made it easier – only more difficult, more painful. A short drive and I can see Palestine from here. Over the valley I see the hills, even recognize cities. My friends, my family, my apartment in Ramallah is there – but I can no longer reach it. Palestine is becoming a memory and I struggle to hold the visuals, the reality of my life there, as close to me as I can. This is how When I Saw You was born. The striking visual knowledge of being so close to home and yet it being an impossible dream. The reality of seeing what you want but being unable to reach it. This film is about the depth of that