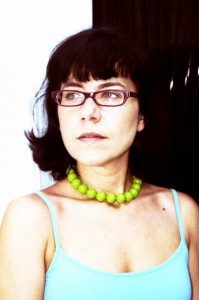 Now this novel has just been published in French under the title Secrets d’Alcôve by prestigious French publishing house Éditions Stock at their series La Cosmopolite, also known as “La Rose”, due to the always pink covers. And with a great translation by Marianne Millon.

The three main characters of this novel, Pilar, Carmen and Mercedes lived at the beginning of the year 1931 until 1938 the accounts that would decide the future of Spain in the next fourty years. Events that, leaded by the three most important rightwing men of the country – José Antonio Primo de Rivera, Francisco Franco and Onésimo Redondo- would be followed, also in the fiction, from very close by these three women, a part of the recent Spanish history.

And just a few weeks ago, almost at the same time of the publication of the French edition of Secrets d’Alcôve, Carmen Domingo’s second novel, La Fuga (The Great Escape) was published by Ediciones B. The book was launched in Pamplona, in a press conference organised at the San Cristóbal Fort, where took place the historical events that are the basis of the novel.

Andrea returns home after some years abroad. Her grandfather, with whom she spent her childhood, is very ill and she wants to spend his lasts months with him. Andrea discovers a secret hidden by her grandfather in a shoe box: he was present at the greatest escape from a prison ever made in European history. On May 22nd 1938, in the middle of the Spanish Civil War, 795 political prisoners escaped from the San Cristobal Fort in Pamplona, with the intention to get to France. That day, the almost 2,500 prisoners found the gates open for escape, even to reach freedom, but the majority didn’t dare to try their luck. Only three got away from the grips of the fascists…

Here a 3 minutes TV clip: Carmen Domingo explaining some details of the novel at the San Cristóbal Fort. And more in this blog.