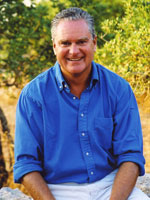 Tim Parfitt, British author of A load of bull (published in the UK and Spain so far) represented internationally by the Pontas Agency, is also the author of a funny script previously titled Hello, Dalí! and now known as The Barcelona Connection (see self-created poster below).

As a result of several meetings and conversations with US, UK and Spanish producers it seems that we are finally moving on with the film project as an international co-production.

The film’s script has been written by Tim Parfitt, the former managing director of Conde Naste Spain. It tells the story of a hapless US art expert who arrives in Spain to examine newly discovered Dali paintings but falls in love and gets caught up in a kidnapping. At the same time, the US president arrives for a world peace conference.

“We are currently looking for a director and financing for the project, which will shoot in Barcelona,” Joaquin Padró, a producer and partner at Rodar y Rodar, told ScreenDaily. He added that the project has also had interest from some of the US studios.

It is hoped that the clumsy art detective can be developed into a book and film franchise. The Barcelona Connection will be followed by Goodbye, Goya and Pinching Picasso.