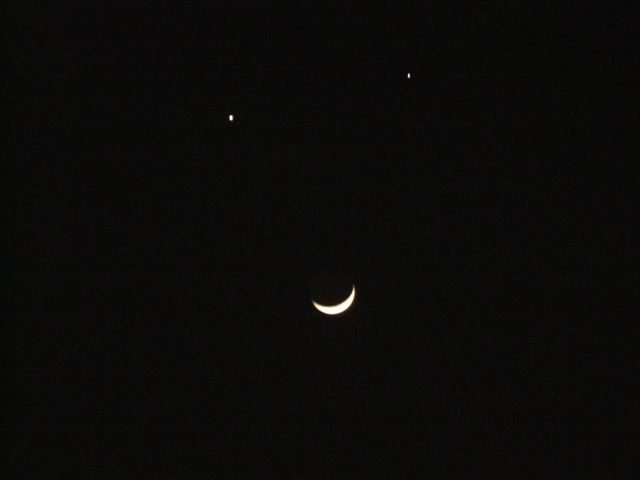 Pimolporn Yutisri, managing director at Tuttle-Mori Agency in Bangkok, our co-agent for Thailand, Indonesia and Vietnam, sent us this amazing picture, taken in Bangkok on Monday December 1st:

According to her, Venus and Jupiter orbited to be as the eyes and the Moon smiled. And it made everyone smile (*_*).

While the moon was probably smiling around Bangkok, Tatiana Salem Levy was smiling in Sao Paulo, since she was awarded with the most important literary award in Brazil for the Best First Novel of the Year: A Chave de Casa (also known as The Key of Smyrna), published by Record in Brazil and Cotovia in Portugal. The Best Book of the Year award was for Cristovao Tezza. We have already sold Spanish translation rights of Tatiana’s novel to Ediciones El Aleph and we’ve been told that at least two film producers are interested in adapting the novel and we’ll be happy to be hearing from them soon!

A few days ago, Catalan author Salvador Company won the Joanot Martorell Award in Gandia for his novel Silenci de plom (Silence of lead). The book is being published by Edicions 62.

At the beginning of the week we were happy to close a deal with Roca Editorial to publish Maha Akhtar’s,The maharani’s hidden granddaughter. Spanning three generations, much of the world and a century, is a memoir of four remarkable women: Anita Delgado, a humble flamenco dancer from Malaga who, at the age of 17, married the Maharajah of Kapurthala in India; Laila, a Lebanese strong woman; Zahra, her daughter who made the tragic mistake of falling in love with Ajit Singh, the son of Anita Delgado and the Maharajah; and lastly Maha, our auhor! Who discovered her Indian and Spanish side of her ancestry by accident when she was 41 and was working with Dan Rather at CBS News in New York…

And we are ending the week with a Greek offer to publish Red dog, Red dog by Canadian author Patrick Lane... We'll see what happens next week and hopefully a contract in Greece will be added to the deals recently closed with Gallimard in France, Signature in The Netherlands and Heinemann in the UK.