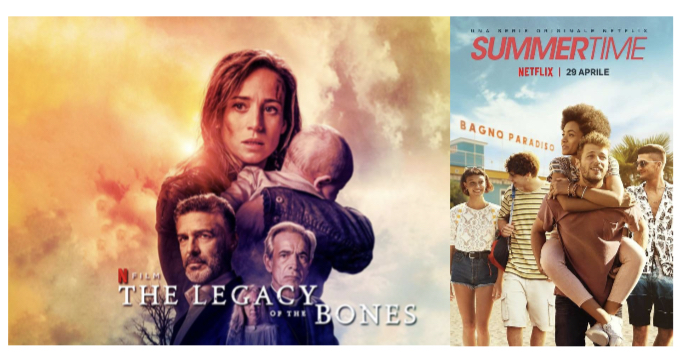 During the time of global confinement, two authors represented by the Pontas Agency, Dolores Redondo and Federico Moccia, have seen the audiovisual adaptations of their works going online on Netflix with great international success.

On March 17th, The Legacy of the Bones, the second book of Dolores Redondo’s Baztan Trilogy, was released by Netflix and, that same day, became the most seen film on the platform in Spain and was among the top 10 in many countries around the world. Thousands of people who had missed the adaptation of the first book in the series, The Invisible Guardian, already on Netflix since 2019, decided to watch it too.

Dolores Redondo is one of the most read authors in Spanish language since the beginning of the pandemic. Her five novels published up to now have sold over three million copies worldwide and are published in over 36 languages. The film adaptation of her novel Todo esto te daré (All This I Will Give To You) is currently under development, while the audiovisual rights of her latest work, La cara norte del corazón (The North Face of the Heart) are on sale with several producers interested.

On April 29th, Summertime, an 8-episode original series inspired by Federico Moccia’s novel Tre Metri Sopra il Cielo (Three Meters Above Heaven), was released on Netflix and became one of the most seen new series worldwide. This was the first novel written by Federico Moccia and it was rejected by every Italian publisher, so he decided to self-publish it in 1992. The 2,000 copies printed were sold quickly and the work survived in photocopies for eight years until, by chance, one of those copies fell into the hands of a filmmaker who realised its potential. It was adapted to the big screen in Italy and the novel was published, at last, by Feltrinelli, as well as the two following instalments of the trilogy. It was also adapted to the big screen in Spain. More than 25 years later and over 5 million copies sold, it is still a bestseller (currently published in Italian by Nord/Maurispagnol and translated into many other languages). Finally the entire trilogy will be published in English language for the first time by Grand Central this 2020, with completely different titles. ONE STEP TO YOU will be the first one.

Rome already has the “Moccia route”, the sentences of his books are written on the walls of the city and, as the protagonists do in his second novel Ho voglia di te (I Want You), thousands of young readers seal their love by attaching a padlock on the Ponte Milvio, as well as covering bridges all around the world, many not knowing that this comes from a scene in a book by Federico Moccia. Meanwhile, Elizondo, the village in Navarra where Dolores Redondo’ s trilogy takes place, has become a “readers pilgrimage place” and thousands of people have visited and done the “walking tours” that are organised every weekend since the first title was published in 2013.