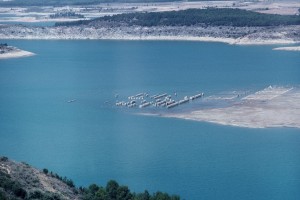 Teresa Viejo is a well-known Spanish journalist represented by the Pontas Agency who has hosted many shows for the main Spanish televisions and directed several radio programs. The Memory of Water is her first novel and has just been published in Spain by Martínez Roca (Planeta).

This image of the Buendía’s reservoir, in Castilla-La Mancha, not too far from Madrid, made Teresa Viejo start a research about what was sinked under the waters....

The Memory of Water in the media: The promotion has already started and Teresa Viejo is explaining her research and the story that inspired her novel in the media and mainly on TV.

About the novel: After his mother’s death, Álvaro de Llano accidentally finds a letter and a photo that will change his life. He will start a tireless search in which he will meet an old woman who knows a story forgotten by everybody: the legend of the Isabela spa. Built in the 19th century, it turned into the favorite pleasure place for the Spanish and European high class. With its splendid parties, formal balls, glitz and glamour of the 1920s, La Isabela soon became a paradise on Earth for many.

But when a bather misteriously dies in the inhalations room, nothing will ever be the same again. Converted in a psychiatric hospital over the years, the walls of the old bath resort held for decades some secrets which are nowadays submerged under the waters of the Buendía’s reservoir. But what did this sanatorium really hide? What kind of scientific experiments where carried out there during the Spanish Civil War? Why is the old lady so attached to the sanatorium?

Passion, intrigue, forbidden loves, murders and the continuous murmur of water enlivens this powerful debut novel by the journalist Teresa Viejo about La Isabela, the spa that vanished under waters.

Some images: we suggest to watch the trailer the author has produced herself in order to put some images to the plot! Worldwide rights are available and a TV series is already under development.

More about the author: a very communicative and popular media woman, Teresa Viejo has hosted many shows for the Spanish TV channels TVE, Antena 3 ("7 días, 7 noches"), Canal 9 and Televisión Autonómica de Castilla-La Mancha ("Tal como somos"). She has been a regular radio host and she was the first woman to conduct a morning show (in Radio España). Her career took a new turn and became a part of the Spanish media history when she accepted the direction of the weekly magazine Interviú, as the first woman ever directing the most read magazine of general interest in Spain. She regularly publishes articles in the national press (Interviú, ADN journal). In 2001 she was appointed ambassador of Unicef because of her solidarity work. She is the author of thre