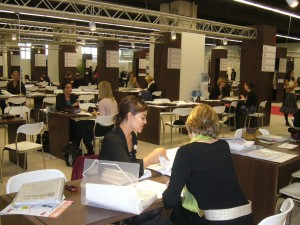 The Frankfurt Book Fair is a meeting place for the industry’s experts. Be they publishers, booksellers, agents, film producers or authors - each year in October, they all come together and create something new. It is the most important marketplace for books, media, rights and licences worldwide. More than 7,300 exhibitors from 100 countries, 299,000 visitors and over 10,000 journalists. The Pontas Agency was there again (and never missed a “Frankfurt” since 1992!). This year Anna Soler-Pont,   Martina Torrades andCarina Brandt attended meetings with publishers and film producers from all around the world during six days.

Despite the economical crisis, we succeeded in closing very good deals (some at auctions and some in pre-empts). Among them, we sold Nefilim, by Swedish author Asa Schwarz, to Presses de la Cité (France), Planeta (Spain and Brazil), Fanucci (Italy) and Presença (Portugal); The Laser Man, by Swedish author Gellert Tamas to Debate/Random House Mondadori (Spain) and Iperborea (Italy); andBedchamber’s conversations by Spanish author Carmen Domingo to Éditions Stock (France).

Martina Torrades (left) and Carina Brandt (right) in the middle of meetings with publishers at the Agent´s Center.

From left to right: Eric Visser (from De Geus in The Netherlands), Anna Soler-Pont and Abel Gerschenfeld (from Denoël in France).

Lucien Leitess (from Unionsverlag in Switzerland) in between meetings at the Frankfurter Hof Hotel, which is also part of the fair. And Chris Herschdorfer  (from Ambo Anthos in The Netherlands) withJudith Uyterlinde celebrating he will publish her next book, The Woman Who Says She is My Mother,which we are happy to represent worldwide!

Frankfurt is also the place to meet old friends and collaborators. Nikki Anderson (left) and Henriette Schimanski (right) were part of the Pontas team in the past (they both worked with us for about three years until they decided to return to their countries) and is always a pleasure to keep in touch with them (Nikki being now an editor at Spinifex Press in Melbourne, Australia; Henriette being an editorial assistant at Piper Verlag in Munich, Germany).

And although professionals never have the time to stop and listen, it is always interesting to have the chance to see a live interview with the latest