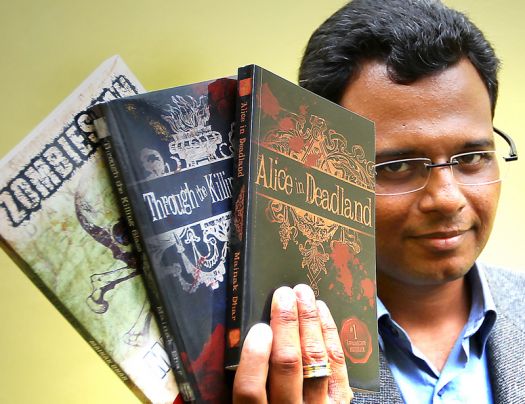 This is the press release that was sent out and was covered by several media:

NEW YORK, July 24, 2013 - Sonar Entertainment has licensed the top-selling series of dystopian novelsAlice in Deadland from Barcelona-based Pontas Literary & Film Agency and will develop a series for television based on the books. The announcement was made today by Stewart Till, CEO, Sonar Entertainment and Anna Soler-Pont of Pontas Literary & Film Agency.

In Alice in Deadland, civilization as we know it ended more than 15 years ago, leaving a barren wasteland called the Deadland and a new terror for the humans who survived — hordes of undead Biters.

15 year-old Alice has spent her entire life in the Deadland, preparing for the ongoing war for survival against the Biters. One day, Alice spots a Biter disappearing into a hole in the ground and follows it, in search of the fabled underground Biter bases. As Alice learns the truth, she is propelled into an action-packed adventure that changes her life forever.

Alice in Deadland is written by Indian author Mainak Dhar, whose passionate and growing fan base has made him a self-published, reader-driven international success story. With 13 titles to his credit, Dhar’s novels have become eBook bestsellers on Amazon.com and established him as one of the top-selling horror authors on Amazon worldwide.

According to Anna Soler-Pont,“Alice in Deadlandis an absolutely brutal, hilarious, sophisticated and extremely effective zombie series based on the classicAlice in Wonderland. The series also includes the finished novelsThrough the Killing Glass,Off with their HeadsandHunting the Snark.”

“This is an exciting literary property that clearly has captured the imaginations and the hearts of fans across the world,” said Till. “Mainak’s cinematic style and heart-pounding pacing make Alice in Deadland perfectly suited to be adapted for television.”

About Sonar Entertainment, Inc.: Sonar Entertainment, Inc. is a leading developer, producer and distributor of award-winning television series, mini-series and movies for the global television marketplace. Sonar owns rights to over 1,000 titles comprising more than 3,500 broadcast hours of programming. The company maintains strategic creative and licensing partnerships with producers and broadcasters throughout the world.