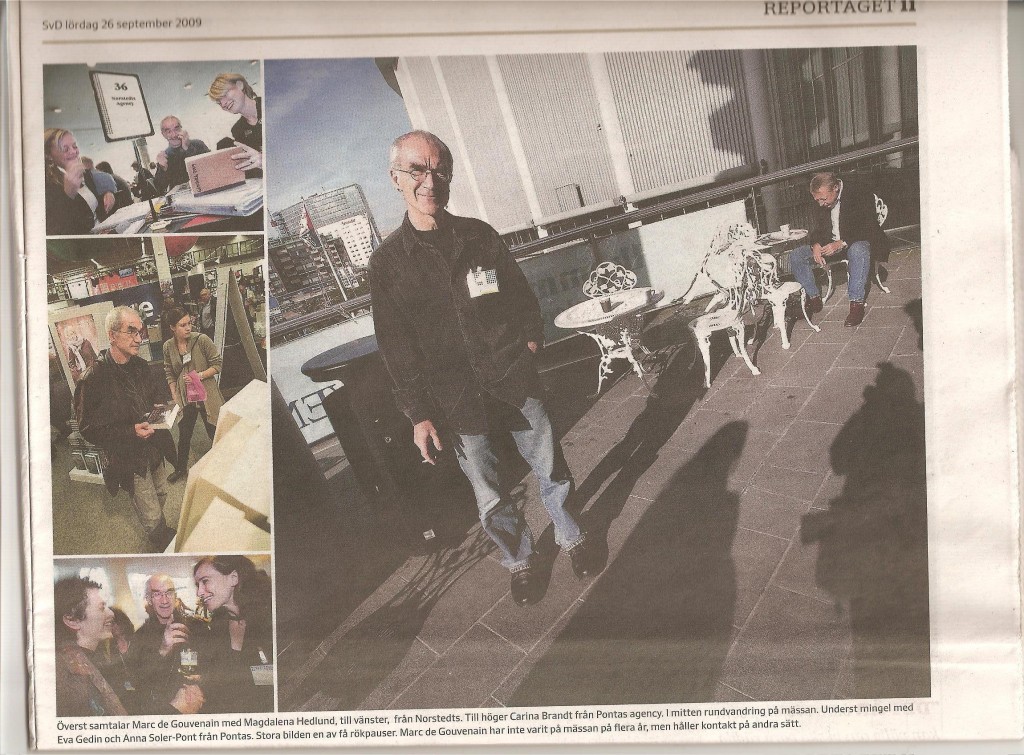 The Göteborg Book Fair, the most important publishing and literary event organised in Sweden and in the entire Scandinavia, took place from 24th to 27th September 2009. Marc de Gouvenain, Anna Soler-Pontand Carina Brandt attended the fair and had a full schedule of meetings to reinforce the Pontas networking. We are interested in selling more translation rights in the Scandinavian countries and to increase the list of Scandinavian authors represented in collaboration with other agencies and publishing houses.

The first day of the fair, Lina Kalmteg, a journalist from the Svenska Dagbladet, the main Swedish newspaper, followed Marc everywhere. As a result, an article was published on 26th September 2009 and you can read it below!

- Hi, good to see you again. We do have an appointment later, don’t we ?

At the International Rights Centre on the first floor of the Swedish Book fair, where agents and publishers have their appointments all day long, someone passes by and gives a French kiss and hug the French literary agent Marc de Gouvenain. Carina Brandt, his Swedish colleague, living in Spain, is checking their agenda.

As a child, Marc de Gouvenain had a dream: Iceland. When he could go there in the middle of the sixties, that was the beginning of his interest for Scandinavia. Two years later, he was hitch-hiking to Sweden, he tells us in fluent Swedish, still with some accent. To make the story short: in a few years, he was involved in Swedish literature promotion.

He stands up for another meeting in the nearest room, a sort of bingo-hall with red and black tables, with panels announcing the agencies names. There he takes a chair, by number 37, where Nanna Thylstrup of Art People Press welcomes him with a smile.

After living a few years in Malmö, he worked as a French language teacher, two years in Ethiopia and fives years in Morocco where, with his Swedish wife at that time, he kept on translating Swedish books.

- It was so strange; sometimes we didn’t even have light in the evening. But passion means one can get crazy! he says, widening his brown eyes.

Marc de Gouvenain (with Lena Grumbach) has up to now translated something like a hundred Swedish novels, in particular those of Per Olov Enquist, who became a good friend, but also Kerstin Ekman, Göran Tunström, Torgny Lindgren, Lars Gustafsson…

After twenty-five years with the French publishing house Actes Sud, where he was in charge of the Scandinavian series, publishing some five titles a year, he has, since last July 2009, joined Pontas literary and film agency, based in Barcelona. He is now in Göteborg to strengthen the Pontas list of Swedish and other Nordic writers.

- Let’s make the deal for one year, and then we’ll see how it works, says Nanna Thylstrup, and Carina nods.

Marc de Gouvenain has found a minute to swallow a coffee and a cake – his lunch – and lights the afternoon first cigarette on the large balcony next to the Agent’s centre.

But let’s leave this Autumn sun to a snowy evening in Stockholm in December 2004. Marc de Gouvenain walks along Riddarholm quay with his friend Agneta Markås from Norstedts and she tells him about a good manuscript that the publisher has recently received, written by some Stieg Larsson.

- She knew that I wasn’t publishing crime but she thought that still this could interest me.

He read the three manuscripts non stop and immediately phoned his editor in chief to say that Actes Sud should buy the rights.

Marc de Gouvenain wore a leather jacket even before the success of the Millennium trilogy, now sold to 3.5 million copies in France, but he takes this brown jacket he now wears indoors as an example of how people can behave now that his status has changed: « Oh, you can buy leather clothes now that you’re rich! »

- When I was a poor translator, nobody ever came to me and commented that I didn’t have money and never got paid for holidays or the days when I was sick. Not a word !

Marc de Gouvenain has now hanged his jacket. The temperature has risen in the International Rights Centre. At each table at least two persons are sitting and discuss hastily as time is counted.

Marc de Gouvenain and Magdalena Hedlund from Norstedts Agency discuss what’s being going on since their last meeting in Spring. On the table between them, files on two contemporary promising writers, Helena von Zweigbergk and Gabriella Ahlström.

She also mentions the future publication by Norstedts of a Swedish writer, who died in the fifties, and explains that they wish the book could come out in Spain. The three agents from Pontas hum and write down notes. Magdalena Hedlund also shows a brochure for the promotion of Thomas Bodström, who Anna Soler-Pont from Pontas mix with the actor Michael Nyqvist, also published by Norstedts.

The International Rights Centre has now become quite a noisy place. It’s time for a glass of wine, snacks and discussing books from all countries.

Marc de Gouvenain has in hand the cigarette he’s impatient to light. He and his colleagues laugh and exchange views in Catalan.

He’s glad. As expected in the morning, some agreements have been signed that only personal contacts can help to come to.

- But it’s not like buying a car and driving away. We’re just in the first phase of a project, says he as the need of a smoke leads him outside on the balcony, passing by a few friends he greets with a smile.

Indeed, some of the Scandinavian books he published were real fiascos. But never was the fault of the book, he says. Could be the timing, or because of other reasons. He doesn’t like when people say thatMillennium has opened the French reader’s eyes to Swedish literature.

- The interest for it was already there long ago. In the fifties and sixties, French publishers proposed translations of Pär Lagerkvist, for instance, Selma Lagerlöf or Birgitta Trotzig.

Is Millennium trilogy the climax in his career, then?

-I just hope, and I’m sure it’s the case, that people here in this Book Fair do not only see me as the translator and publisher of Millennium in France, but as the guy who was crazy enough to translate P.O. Enquist’s Hess already in 1969, and has never stopped since.