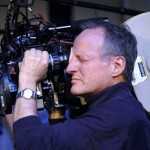 Since last May 15th Susana Fortes won the Fernando Lara Novel Award in Spain for her new novelWaiting for Robert Capa, the Pontas Agency has been working hard to sell film rights. It was clear that a great film was inside the book! And we are now glad to announce that producer and director Michael Mann has acquired the film rights through his company Forward Pass in Los Angeles.

Michael Mann is considered to be one of America's top filmmakers. He gained wide spread recognition in 1992 for his film adaptation of James Fenimore Cooper's novel The Last of the Mohicans, starring Daniel Day-Lewis. Among his next films are Heat and The Insider (both of which featured Al Pacino along with Robert De Niro in Heat and Russell Crowe in The Insider). The Insider was nominated for seven Academy Awards, including a nomination for Mann's direction. Ali (starring Will Smith) and Collateral (with Tom Cruise and Jamie Foxx) were also two very successful films.

In 2004, Michael Mann produced The Aviator, based on the life of Howard Hughes, which he had developed with Leonardo DiCaprio and was directed by Martin Scorsese. The Aviator was nominated for an Academy Award for Best Picture but lost to Million Dollar Baby (another novel adaptation). More recently, Michael Mann wrote and directed Public Enemies based on Brian Burrough's nonfiction book,Public Enemies: America's Greatest Crime Wave and the Birth of the FBI, 1933-34. It starred Johnny Depp and Christian Bale and was premièred a few months ago.

We don’t know yet who is going to write the script adaptingWaiting for Robert Capa and it is too early to know if Michael Mann will direct the film himself or will only produce it. Susana Fortes’ novel is based in the love story and professional relationship between a young German woman called Gerta Pohorylle and a young Hongarian man called Endre Friedmann since they met in Paris in 1935 until she died in the Spanish Civil war in 1937. Both communists, jewish, exiled and photographers, they decided to change their names in order to sell better their works and became Gerda Taro (as an hommage to the Japanese Taro Okamoto) and Robert Capa (a mix of Robert Taylor and Frank Capra, so he could seem an American photographer). With these new identities, they arrived to Spain to inform about the Civil War. At first, together. Later on, Taro started to work on her own until her life reached an end abruptly in July 1937.