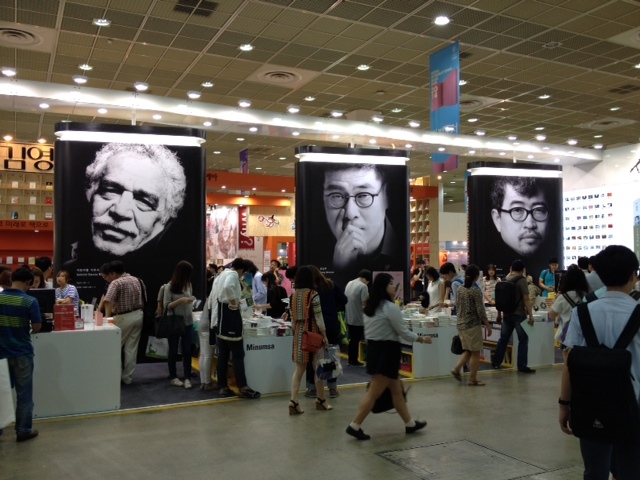 To be physically close to publishers and their markets, as well as to authors, has always been a priority of thePontas Agency. For years, we have tried to visit as many book fairs and writers festivals as possible, get to know as many foreign markets, readers and cultures as possible, participate in as many international seminars as we can, in order to achieve a closer understanding of international trends and literary tastes – and a better understanding of the business we are in and the partners we work with.

At the Seoul International Book Fair, which took place between the 17th and 20th of June, Marina Penalva got a firsthand feel of one of one of the strongest and most modern Asian publishing markets (together with Japan). On the first evening of the fair she had dinner with Kelly Falconer, founder of the Hong Kong-based Asia Literary Agency (which Pontas represents in Europe and Latin America), authorHyeonseo Lee and Mike Breen, the co-authors of the memoir The Girl in the Red Shoes, which Pontas has sold to 11 international publishers already (photo below).

Between many scheduled and improvised meetings, the Seoul Book Fair also invited Marina to speak about the current trends in the Spanish publishing market to an audience of Korean foreign rights professionals. Marina also met with Dongshin Cho (both in the photo), who in the past had acquired Jonas Jonasson’s rights from Pontas for his previous job at Open Books, and is currently the new Korean editor of the successful Spanish crime novel The Invisible Guardian by Dolores Redondo, which is to be launched by his new publishing house, 21Book, in September. Gregory Limpens (with a typical delicious Korean lunch) is now an editor at Open Books.

Minumsa Publishers, Munhak, Gimm-Young Publishers, Random House Korea and many other Korean publishers who translate international fiction and nonfiction were all informed, first hand, of our agency authors and titles and of the highlights that could be suitable to them. Though there is still a lot of work ahead to do, a big step has been made with this first-time participation of Pontas at the Seoul Book Fair. Hopefully many rights sales will follow soon and our agency authors will be read and appreciated in the thriving Korean market. Here below, Marina with Mimunsa´s editor Michelle Nam and the Secret Garden Temple.