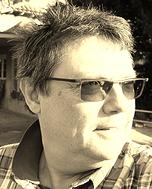 Guenny Rodewald, in his own words:

“Born the youngest son of the bookseller Wilhelm Rodewald, I spent my afternoons as a schoolboy in my father's bookstore and my evenings and nights as an extra and in small parts at the legendary Bremen Theater.

After finishing school, I studied mathematics and law at the Universities of Kiel and Bremen. My activism within political Autonomist groups in the 1970s carried me to the Buchladen im Ostertor bookstore in 1979, and I suddenly found myself in the same profession as my father, which I had actually never planned to pursue. In 1985, I left my hometown for Barcelona.

There, by happy chance, I met Ute Körner (1939–2008), in whom I found a great mentor and who taught me the wonderful profession of the literary agent. In 2000 I became a co-partner of the Ute Körner Literary Agentand was managing director beginning in 2005.

In 2013, I left the agency and since January 2014 I have been working as an independent consultant for literary agencies and publishers inside and outside Spain.

In addition to that, I write as a columnist and Spain correspondent for the German trade magazineBuchMarkt and other trade publications and internet portals. I teach promising publishers as a part of master classes at the Universitat Autònoma de Barcelona.”