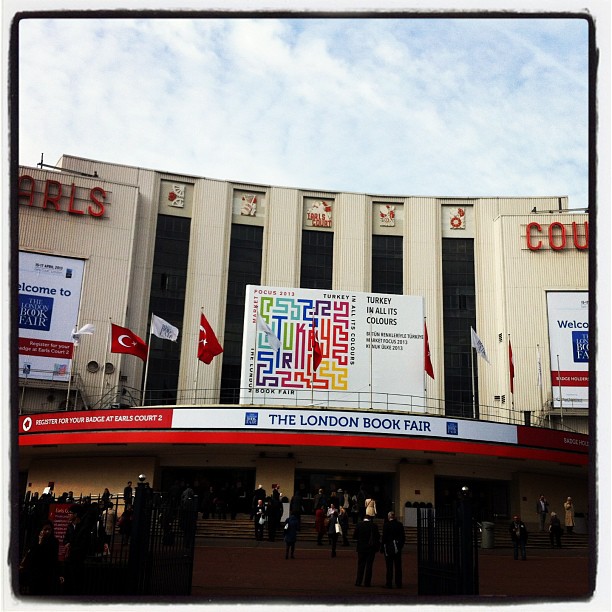 During the entire London Book Fair 2013 (April 15-17), Patricia Sánchez and Marina Penalva Halpin attended the London Book Fair on behalf of Pontas Agency . Between them, they met with over 200 international editors and film producers and discussed titles and authors from the agency. (Photo below left courtesy of Maria Cardona; right, the view from the International Rights Center where Patricia and Marina had their meetings).

They also celebrated the 18th translation of the agency bestseller El guardián invisible by Dolores Redondo, which has reached 100,000 copies in print in Spain, and the global success of The 100-Year-Old Man Who Climbed Out the Window and Disappeared by Jonas Jonasson: 5 million copies sold worldwide (close to 2 million in Germany alone!) and currently #1 in Canada. As well as strengthening international ties for all the agency authors, there was also a lot of interest and curiosity in some of Pontas’ new authors, such as Mainak Dhar, Isabel Medina, Victoria Hutchinson, Susana Hernández, F. V. Scheidt or Sándor Jaszxbérényi .

The good weather in London also provided many pleasant opportunities for informal discussions with foreign editors and agents about the future of publishing, new opportunities for authors and new publication models.

In the photos above, Niko Aula (editor from the Finnish publishing house Gummerus) and Marina Penalva Halpin (with a bottle of champagne brought to the International Rights Center by Niko to celebrate Dolores Redondo´s contract signature); French producer Thierry Decourcelle, from TF1, and Frédérique Polet, from Presses de la Cité.

Patrick-Janson Smith (Blue Door/HC) and Simon Taylor (Transworld); and the concert by Half on Signature, the great international publishers band (with Jacqueline Remmers, Hayo Deinem…, performing at The Troubadour – photo by Jacqueline Smit).