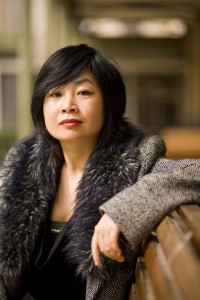 In our search for strong new voices from all around the world, at Pontas we have found Julie O’Yang and her novel Butterfly. Written in English, we look forward to seeing it published, translated and adapted into a film as soon as possible!

Born and brought up in China, Julie O’Yang came to Europe in 1990s to study at the University of London. Then she read Japanese Language and Literature at the University of Leiden, The Netherlands, and Tokyo, Japan. She has worked in several Dutch and Chinese media as a journalist and translated a good number of contemporary novels from Chinese into Dutch. She has published two novels in Dutch. Julie travels extensively between The Netherlands, where she resides, and China, working as a writer, screenwriter and visual artist. Butterfly is her first novel written in English.

About Butterfly in short:

Two lovers get together again on account of a promise they made over sixty years earlier.

On the tragic day Butterfly and Maru parted, they agreed that they would run as fast as they could but each in opposite direction of the other, and they wouldn’t stop until they both had made a half circle around the world to meet up again. This happened in 1944, during the Sino-Japanese war, when their secret love affair between a married Chinese woman in her mid-forties and a young Japanese soldier in his twenties was discovered.

Escaping war-torn cities, the wealthy Chinese family Fu moved to a small fishing village hidden in the hills along the river Yangtze. Butterfly, a calligraphy artist had lost her speech due to her son’s death on the day when the Japanese army marched into China’s capital of Nanking and brutally slaughtered hundreds of thousands of Chinese civilians. The shocking event, including barbaric treatment of women, became known as the Rape of Nanking. Earlier that morning, Butterfly had sent her son to bring a calligraphy scroll she made for one of her regular clients and he never returned.