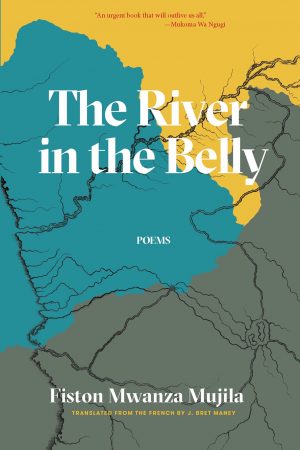 The River in the Belly

A moving lyric meditation on the Congo River that explores the identity, chaos, and wonder of the Democratic Republic of Congo as well as race and the detritus of colonialism.

With The River in the Belly, award-winning Congolese author Fiston Mwanza Mujila seeks no less than to reinitiate the Congo River in the imaginary of European languages. Through his invention of the “solitude”—a short poetic form lending itself to searing observation and troubled humor, prone to unexpected tonal shifts and lyrical u-turns—the collection celebrates, caresses, and chastises Central Africa’s great river, the world’s second largest by discharge volume.

Drawing inspiration from sources as diverse as Soviet history, Congolese popular music, international jazz, and everyday life in European exile, Mwanza Mujila has fashioned a work that can speak to the extraordinary hopes and tragedies of post-independence Democratic Republic of the Congo while also mining the generative yet embattled subject position of the African diasporic writer in Europe longing for home.

Fans of Tram 83 will rediscover in River the incandescent, improvisatory verbal energy that so dazzled them in Mwanza Mujila’s English-language debut.

"Vigorously translated by J. Bret Maney, the writing melds jazz rhythms with surrealist imagery (“do you ever feel like grabbing the sun and tossing it from the window until it scatters like a die?”). Its meandering course traverses a range of Congolese life, from its laborers to its soldiers to its thriving underworld, but more often Mr. Mujila’s associations are personal: “Not blood but the Congo River sloshes in my veins,” he writes. “Didn’t they tell you my mouth stinks of Lake Munkamba, once infested with schistosomiasis? / didn’t they tell you [Mount] Nyiragongo beats in lieu of my heart?” This is, at its source, an expat author’s declaration of identity, and just as the river has formed Mr. Mujila, he has laid a claim to its legacy." –Sam Sacks, The Wall Street Journal

"In this raucous, electrifying what-is-it?—memoir, broken novel, poem series? or is it mainly a protest against the way that dreams  can vanish like migrating birds?— Fiston Mwanza Mujila opens every stopcock that holds back his lust for life. His words rush forward in punctuated swells— like the Congo River he so often mentions. International in his imagination, wary of spells cast by sorcerer-crocodiles and waitresses, Mwanza Mujila masters a visceral, multilingual, song-spiked account of human experience that no one will forget." –Forrest Gander, Pulitzer Prize-winning author of Be With

“After all the riches that have been torn from his country by foreigners, asks this remarkable poet, ‘will they also find a way to haul away the Congo River and use it as room freshener?’ Mwanza Mujila’s raw and passionate work is an authentic voice from a long-suffering land whose story we are too often accustomed to hearing only from outsiders.” —Adam Hochschild, author of King Leopold’s Ghost: A Story of Greed, Terror, and Heroism in Colonial Africa

“Those already familiar with Tram 83 will recognize some of its precursor features in The River in the Belly, first published in 2013. The collection is full of cryptic images of sorrow and lamentation drawn from the African landscape but also fully augmented with others from a consciousness shaped by exile. The beauty of Mwanza Mujila’s poetry comes from the telescoping of pain and despair into a language of unexpected juxtapositions. The resemblance with Dambudzo Marechera is not accidental, for they both attempt to hurl language into the abyss and to decipher the vague and mangled echoes that return to them in that act. A new and provocative contribution to African Literature.” —Ato Quayson, Stanford University

“The poems show the Congo River running through Mwanza Mujila’s veins as he contemplates mortality, (in)voluntary exile, the resource curse and the physical grandeur of the river itself…. These translations are a must-read.” —Johannesburg Review of Books, Efemia Chela

“Translation is the ultimate tribute, a tributary to the river of beauty and this is so present in The River in the Belly. This is an urgent book that will outlive us all, but we can excavate it now. There is anguish. But for each wound Mwanza Mujila opens and tenderly kneads, he also sutures with a deep love. We must listen!”  —Mukoma Wa Ngugi, author of Logotherapy and Black Star Nairobi

"This book … is a masterpiece of poetic imagination and excellence. It is a melancholic meditation on the Congo River and the huge country named after it, while also expressing from the poet’s new home in Austria his homesickness, solitude, and nostalgia for the good things he remembers from his country of origin... Using the mighty river as a metaphor for his own connection to the DRC, known during his first sixteen years as Zaire, Mwanza Mujila depicts a bleak picture of the regimes of Laurent and Joseph Kabila." —Georges Nzongola-Ntalaja, author of The Congo from Leopold to Kabila: A People’s History

“More subtle, mischievous poetics from Fiston Mwanza Mujila, this time mediated by the big river, unexpected materialities and anguish, mediated by solitude with some prose segments and a very fine translation. A book urgently wondering about deprivation, desire, violence, animal–human relations, exile, music, madness, and the diverse pulses of Congolese urbanities. Exquisite and profound, and eminently teachable too.” —Nancy Rose Hunt, author of A Nervous State: Violence, Remedies, and Reverie in Colonial Congo

“Fiston Mwanza Mujila… thinks back not only to his native river, but also to the almost constant multi-agent civil war that has eviscerated the Congo over the past decades: it is both the bloodiest conflict of our time and one of the least noticed. Maney very capably conveys the intonations and registers of the original in this faithful and beautiful rendering.”  —Eugene Ostashevsky, judge for The 2019 Asymptote Close Approximations International Translation Contest

“A travelogue featuring dyspeptic saints, sophic beasts and, above all, an all-consuming river. Wonderfully subversive.” —Jason Stearns, author of Dancing in the Glory of Monsters: The Collapse of the Congo and the Great War of Africa