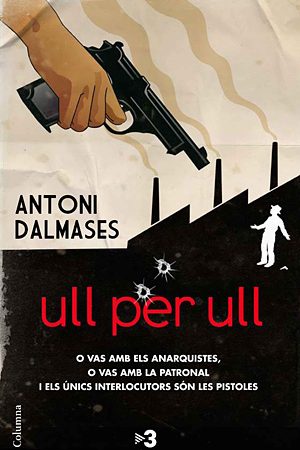 An Eye for an Eye

March 1919. Barcelona is a boiling city. Workers protest, go on strike and organize labor unions. Differences with employers’ organizations are bigger and bigger. Bombs are ready to blow up…

Enric Serra has just come from Africa –where he has completed his military service- to Barcelona in order to gather his brother Isidre, a young revolutionary who fights for a better world, where bosses and workers are on equal terms. However, one day Isidre is unexpectedly murdered by several hired gunmen after leaving the factory where he was working. From that moment on, Enric, longing for revenge, decides to move on to the armed struggle and to secrecy in order to lead the anarchist group of the "Ungovernable”, whose most important heist will be kidnapping Eulàlia Torrents, the daughter of a very rich textile businessman. In the middle of an atmosphere of repeated assassinations and settling of scores, where bombs and attacks are the commonplace and corrupt policemen and informers are everywhere, an impossible love will born between Eulàlia and her kidnapper, Enric, which will become stronger when he confesses that he is actually her father’s murderer…

This novel is based on the script by Eduard Rodrigo and Isaac Palmiola performed for the television series with the same title, directed by Mar Targarona. It is a coproduction between Rodar & Rodar, Televisió de Catalunya and Televisión Española.