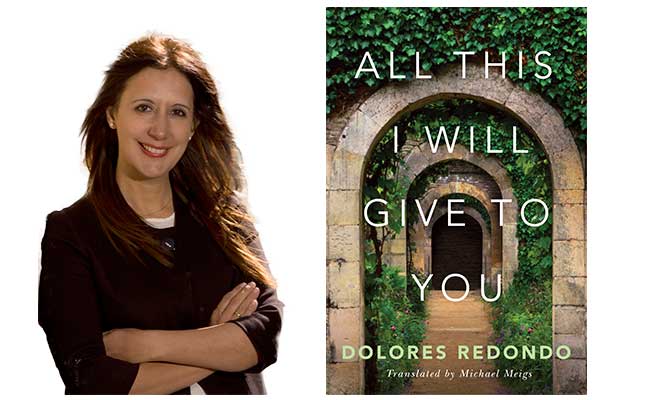 The international bestselling page-turner All This I Will Give to You by Dolores Redondo (translated from Spanish language by Michael Meigs) is finally reaching English readers worldwide on September 1st 2018 published by Amazon Crossing.

Twice nominated for the CWA International Dagger Award for her acclaimed Baztan Trilogy and a finalist for the Grand Prix des Lectrices of French ELLE ’s magazine, Dolores Redondo latest novel has received the 2016 Premio Planeta (one of Spanish language’s most important literary awards) and the 2018 Italian bookseller’s award (Premio Bancarella). It has almost sold 400,000 copies in its original language alone, it has been optioned for film and television series development, and it’s being translated into 23 languages worldwide so far. You can see the full list of publishing houses who have already acquired translation rights here.

Ahead of its publication, the novel has already received raving reviews. The first one appeared on Publishers Weekly: “When popular Madrid-based author Manuel Ortigosa, the hero of this powerful mystery from Spanish author Redondo (The Invisible Guardian), finds out that his spouse, Álvaro Muñiz de Dávila, has been killed in a traffic accident in Galicia, he travels to northwestern Spain to get answers. But he soon realizes that the man he loved for 15 years harbored more than a few secrets: first and foremost, that he was a wealthy marquis who was the head of one of Spain’s most distinguished families. After meeting with Álvaro’s tight-lipped family members, Manuel reconsiders his husband’s alleged accidental death. With the help of a recently retired police detective and one of Álvaro’s childhood friends, Manuel begins examining the family’s guarded history—and uncovers unspeakable darkness. With the beautiful Galician countryside as backdrop, Redondo weaves an impressively intricate storyline filled with more than a few bombshell plot twists. This door stopper of a novel will leave readers utterly satisfied.”

Start reading All This I Will Give to You on CrimeReads.