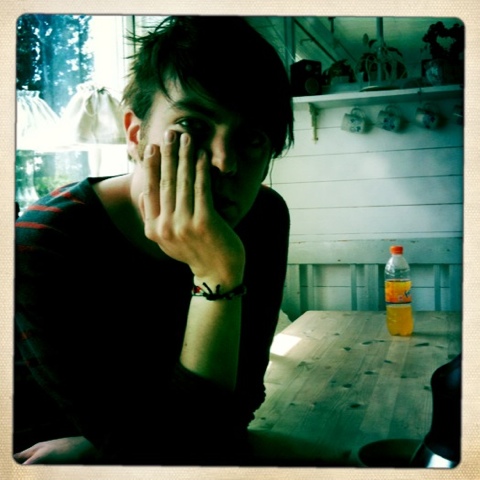 Christoffer Carlsson is one of the youngest and most interesting today´s Swedish authors and at Pontaswe have the pleasure to be representing him internationally. His new novel, The Invisible Man from Salem, is being printed at the moment and will be launched in Sweden on August 28th, 2013, by Piratförlaget. Translation rights of Christoffer´s previous novels, The Case of Vincent Franke and The One-Eyed Rabbit, have been sold into six languages so far; and there is a film adapting The One-Eyed Rabbit currently in development by Swedish producer Helen Lindholm at Atmo .

Some information about the author in his own words: “I’m now less than one year away from being a PhD in Criminology. My dissertation is almost done. In 2012, I was awarded the international European Society of Criminology’s Young Criminologist Award, for my research on criminal offenders, “turning points” and desistance from crime (that is, why and how criminal offenders stop committing crimes and try to live a “crime-free” life). The award has been around since 2006 (I think) and I’m the first Swede to have received it. Pretty cool for a young man from a small town in the South of Sweden.”

Why this novel? Christoffer Carlsson says: “When I’d finished The One-Eyed Rabbit I wanted to write about something very different. I think that’s something you often do as an author; you finish something and what you do next tends to in many ways be the opposite of what you’ve just done. I wanted to write about Stockholm again, and what it looks and feels like today, in 2013. I wanted to explore how much you have to “push” somebody in order to get them truly desperate and make them do things they would never do otherwise. Can we truly, rationally understand why somebody would do a basically irrational action?

I wanted to explore what happens to somebody whose identity no longer exists, and what that can do to a person. I wanted to write about crime, about friendship and love gone wrong, about the effects of bullying, youth violence, and alienation, and about the corruption of power within the Swedish police force. Sweden today, in 2013, especially for young people, looks a lot like it did in the early-to-mid 1990s, during and in the aftermath of the ‘90s Crisis. We have a racist party in the Swedish parliament. Unemployment is high. The distance between the classes is growing faster in Sweden than in any other OECD country. This distance grows not only economically but also socially… While not a political statement or a social analysis of the current state of Sweden, I wanted to write a book with this development as a frame. Growing up in the suburb Salem in the mid 1990s, Leo and his friends are used to police violence and alienation. Being 33 years old in 2013, Leo witnesses the decay of Stockholm, its institutions and organizations and inhabitants.

All these things (and probably some things I’m not consciously aware of) led to the turn my writing took withThe Invisible Man from Salem. But more than anything, I wanted to write a story that would excite the readers! A story that would scare them, make them laugh, make them cry, and make them shudder – all within the same chapter.”