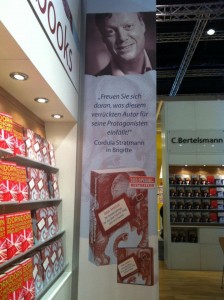 Despite the global economical crisis, the revolutions (yet to be won) and the uncertainties about the digital rights and the fixed book price laws in several countries, this year 2011 will reach its end with many positive results too. Among them, a nice list of awards for some authors represented internationally by Pontas !

The 100-Year Man who Climbed Out the Window and Disappeared by Swedish author Jonas Jonasson has been awarded with the M-Pionier Preis 2011 (Pioneer Prize for New Successful Authors) given by the German bookshops’ chain Mayersche Buchhandlung and with the Danish Audiobook Award 2011, together with « the voice » of Paul Becker. Besides these two awards, Jonasson has been highly rewarded by lots of readers in every language his novel has been translated into (the year will end with more than 250,000 copies sold in German, over 100,000 in French, 90,000 in Italian, 75,000 in Dutch…).

The last snow (La nevada de cucut), the fifth novel by Catalan author Blanca Busquets won theCatalan Booksellers Award 2011 and has been in the bestselling lists since then, of course thanks to hundreds of enthusiastic booksellers who recommend it. The novel will be translated into Spanish by Grijalbo/Random House Mondadori next March 2012 and Blanca’s two previous novels are being very successful at the moment in German (published by DTV).

Les visages écrasés (Broken Faces)  by French author Marin Ledun (published by Éditions du Seuil) was awarded with the Trophées 813 Award 2011 for Best Crime Fiction in French . Besides, the novel was shorlisted for five other awards, among which the Prix des Lecteurs Quais du Polar 2011 and the Prix Pourpres 2011. This novel, also doing very well in Spain (published by Alienta), will be adapted into a French feature film by Junior Productions, most probably with Jean-Paul Lilienfeld as scriptwriter and director, which is also an award in itself !

Paraules emmetzinades (Poisoned Words) by Catalan author Maite Carranza was awarded with thePremio Nacional de Literatura Infantil y Juvenil 2011 by the Ministry of Culture of Spain. This official award recognizes the long journey of an author who has connected with young readers from more than 25 countries. Her trilogy War of Witches has been published by prestigious publishing houses such as Bloomsbury in the UK and USA, Berlin Verlag in Germany, Signatuur in The Netherlands, Pocket Jeunesse in France, etcetera and, after having reached sales over 200,000 copies since its publication, film producers seem to be finally interested...

Cidade Livre (Free City) by Brazilian author João Almino was awarded with the Passo Fundo Zaffari & Bourbon Literary Award for the Best Novel in Portuguese Language of the last two years (2010-2011), one of the most important awards in Brazil for its prestige and also for the cash prize. In the photo, during the acceptance speech in Passo Fundo, the southernmost state. The novel has been published by Record in Brazil and will be launched in French by Éditions Métailié in March 2012.

El sentido del viaje (The Meaning of Travelling), the still unpublished non-fiction book by Spanish author Patricia Almarcegui  won the Premio Fray Luis de León de Ensayo 2011, which means its publication and a generous advance. This award has been a great way to end the year for Patricia after the publication of her first work of fiction, The Painter and the Traveller (by Ediciones B).

We look for many more international and different awards in 2012 !