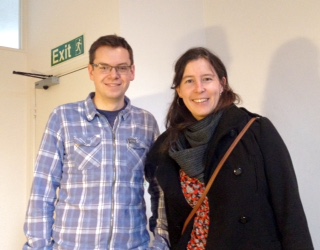 Selling film & TV adaptation rights has always been a major business priority for Pontas Agency. Behind each audiovisual project that is based on a book, there are usually many, many years of work: flash-meetings with producers at book fairs and film markets, long emails and telephone conversations, lunches, more meetings to follow-up, business trips, long contract negotiations…. and all this even before the financing, development and pre-production starts! At Pontas we have always taken a proactive approach and have strived to be present at all the major film markets since over ten years ago (Berlin, Cannes, Los Angeles…). We also make at least two trips a year to London and/or New York to meet exclusively with producers and visit their offices to talk to them about our latest projects.

Last week Marina Penalva went to London on behalf of Pontas to meet with Hey Day Films (producers of the Harry Potter films, and also of Paddington, among other projects) and with The Weinstein Co (one of the major world players in the film production and distribution industry), among some other producers. Finding out what sort of projects these companies are looking to develop, what type of literary properties they are on the look-out for, was one of the main goals of the meetings. The other goal was to pitch our most recent titles, and the ones which we feel have a stronger film potential: from the Frankfurt ‘hot book’ This Too Shall Pass by Milena Busquets to The Fishermen by Chigozie Obioma (another book fair ‘hot book’, this time from the London Book Fair), as well as many other adaptable novels such as Sangre de barro (Still Blood) by Maribel Medina, These days by Jack Cheng, Zombiestan by Mainak Dhar, Heart of Jazz by Sara Lövestam orMornings in Jenin by Susan Abulhawa.

Marina Penalva also met for lunch with Marie Bennett, author of the debut novel Hotell Angleterre. Though Marie lives in London, she is Swedish – and writes in Swedish – and Hotell Angleterre will be launched next July by Whalström & Widstrand, one of the best publishers in Sweden. The Norwegian rights have already been bought by Gyldendal Norsk and the French rights have gone to Éditions Denoël. Hotell Angleterre is a triangular love story set in Sweden during WWII in the vein of Sarah Waters, Sarah Waters or Pat Barker’s novels. Of course, this novel would also make a fantastic feature film or TV mini-series and is already being read by producers in London and Scandinavia, too!

In the photos above: Marina Penalva with Ben Irving of Hey Day; with Marie Bennett; with James Gold of The Weinstein Co. And here below: Paul Preston and Peter Bush (translator) at the presentation of Uncertain Glory by Joan Sales, a classic novel of the Catalan literature, in the British Library and Maria Bohigas (editor of Club Editor), Alex Susanna and Misia Sert (Institut Ramon Llull), Koukla MacLehose, Mercè Estela (Institut Ramon Llull, London office) and Marina Penalva celebrating the launch of Uncertain Glory in the UK by MacLehose Press.