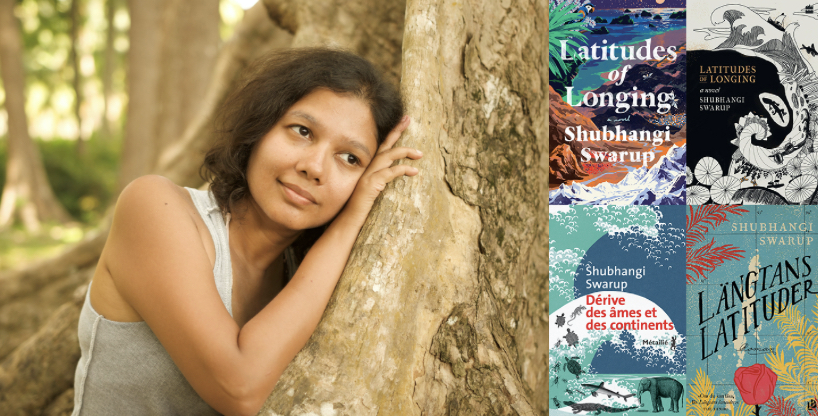 On May 19th 2020, Latitudes of Longing, the debut novel by Shubhangi Swarup, was released in the United States by One World/Penguin Random House and in the United Kingdom by Riverrun/Quercus. It had already been published by HarperCollins in 2018 in India, where the author comes from and lives now, and it became an instant success. Translation rights have also already been sold by the Pontas Agency into ten languages (the French edition is already out with Éditions Métailié and the Swedish too with Modernista, reaching the Swedish top 10 bestseller list immediately).

This is the beginning of a letter from Nicole Counts, New York-based senior editor at One World/Penguin Random House:

“Publishing books during the pandemic is weird, hard, confusing, and yet it can also feel like a light breaking through. Shubhangi Swarup’s stunning novel Latitudes of Longing is that light for me. Besides the gorgeous line-by-line prose and the imagery that sticks with you for years (more on that soon!), Latitudes of Longing delivers a tremendous new understanding of our relation to the earth as well as a soaring view of humanity. This novel is a love letter to the earth, the love that flows between humans, creatures, and the planet. It’s that soul-stirring, ancient love—the kind we remember when we float in the ocean, or lean against a tree.

This novel is also an incredible feat of research and imagination. Shubhangi spent time in every region in the book; taught herself earth sciences; worked as a bar dancer, a teacher, and a journalist; met with an opium cultivator and a political prisoner; and spoke to soldiers about loneliness.”

Latitudes of Longing spans topographies and geographies, toys with time and space as they have been conventionally perceived, and lends magic to language, etching portraits of contested territories like the Andaman Islands, Burma, and Kashmir. Through generations, we follow a scientist who studies trees and a clairvoyant who speaks to them; a geologist working to end futile wars over a glacier; octogenarian lovers; a mother struggling to free her revolutionary son; a yeti who seeks human companionship; a turtle who transforms first into a boat and then a woman; and the ghost of an evaporated ocean as restless as the continents. Binding them all together is a vision of life as vast as the universe itself.

Booksellers across the United States are also falling in love with the book, like Linda Bond from Auntie's, who says:

“Latitudes of Longing is proof that the best stories are told from the perspective of overlapping yet disparate characters, living life, struggling, creating, destroying and learning what there is to know of themselves and the 'others' with whom/which we share the planet. This particular series of stories takes place in India, where life is ripe and full and challenging. I love this novel and I believe you will, too. If nothing else, you'll be changed forever.”