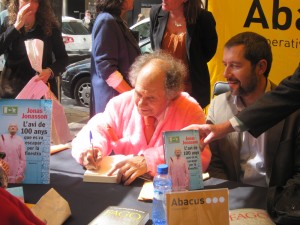 Once again, on April 23rd , Barcelona became the capital of books and roses! Hundreds of authors signed their works to their fans and readers; booksellers were happy in a day that (once again too!) it was supposed to rain but finally didn´t; journalists run up and down to cover so many stories going on; and tourists were amazed to see such a spontaneous show around the pleasure to buy books and roses in the streets.

The big surprise for everybody was the huge success of Jonas Jonasson´s novel in a day where normally successes are for local authors. L’avi de 100 anys que es va escapar per la finestra (La Campana) was the most sold book in Catalan language and El abuelo que saltó por la ventana y se largó (Salamandra) was the second most sold book in Spanish language.  A professional actor, Quimet Pla, became Allan Karlsson for a few hours and readers and journalists had the pleasure to approach the main character of the novel. He knew every single detail of the story and answered all sorts of questions. The only condition: to be called Allan.

Several Pontas authors were signing too. Among them, Martín Piñol, Belén Carmona, Neus Arqués… And in the photos, from left to right, Carme Martí signing her debut novel (Un cel de plom at Amsterdam and Cenizas en el cielo at Roca Editorial) was another of the most sold books of the day, in the bestselling lists since its publication in March.  And Maite Carranza  (Premio Nacional de Literatura Infantil y Juvenil 2011) had lots of young (and not so young) readers waiting for her signature.

Blanca Busquets signed for the second Sant Jordi the same book, La nevada del cucut (now also translated into Spanish), which is very rare. But since she won the Catalan Booksellers Award 2011, all booksellers wanted her to be there! Gabi Martínez was happy signing Només per a gegants/Sólo para gigantes while the French translation is on the way and several film producers have shown strong interest in the adaptation and we are in conversations…