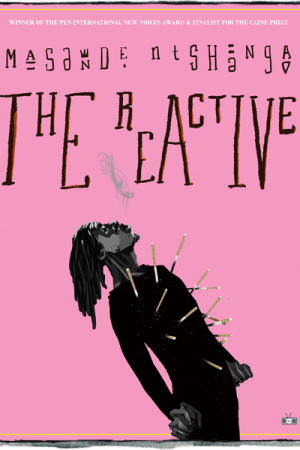 Heralded in the author's native South Africa as "the hottest novel of the year," The Reactive is a clear-eyed and compassionate depiction of a young HIV+ man grappling with the sudden death of his younger brother, for which he feels unduly responsible.

Lindanathi and his friends—Cecelia and Ruan—make their living working low-paying jobs and selling anti-retroviral drugs (during the period in South Africa before ARVs became broadly distributed). In between, they huff glue, drift in and out of parties, and traverse the streets of Cape Town, where they observe the grave material disparities of their country. A mysterious masked man appears seeking to buy their surplus of ARVs, an offer that would present the three with the opportunity to escape their environs, while at the same time forcing Lindanathi to confront his path, and finally, his past.

One of the Best Books of the Year —City Press, The Sunday Times, The Star, This is Africa, Africa's a Country, Sunday World

«With The Reactive, [Ntshanga] has created an immersive and powerful portrait of drug use, community, and health issues by exploring what it was like to be young, black, South African, and HIV positive in the early aughts.» VICE

«[The Reactive] is an affecting, slow-burning novel that gives a fantastic sense of a particular place and time, and of the haunted inner life of its protagonist.» Star Tribune