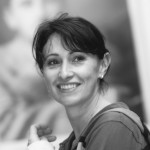 For years, she had been sitting happily on the see-saw, living a well-balanced, perfect love with her husband. She didn’t see the saw that sent her sprawling.

After her husband Julien cheated on her with her best friend and left her, Fatiha is suffering from a very common disease in such circumstances: she’s both alive and dead - though she admits there is no point in jumping out of a first-floor window and no sense in hating a rival who, ironically, just died. Subjective narrator of her own drama, Fatiha is an extravagant mourner and drags the readers into the comical excesses caused by this sad, trivial situation. As her three children would rather have her alive, she struggles to keep hate and grief at bay. With the support of her psychiatrist mother, Fatiha goes into action: to remove the source of the trouble, she will declare her ex-husband dead - although the deceased regularly phones the children. Until the day Julien actually disappears…

Emmanuelle Urien’s novel reminds us that a person emotionally disturbed does not always act rationally, but also that despite strange behaviors, one can always keep being profoundly human.

At Pontas we are glad to be working for Emmanuelle Urien ,an author born in the seventies in Anjou (France) who, as she says, “got lost amongst numbers in different languages before landing in Toulouse and starting to write”. After a university education in Humanities, Languages and International Finance, she is now a tri-lingual translator and writer or sometimes the opposite. She has also written fiction for Radio France before publishing her first novel Tu devrais voir quelqu’un (Gallimard, 2009). All translation rights and film rights of La femme de Schrödinger are available. More information: anna@pontas-agency.com