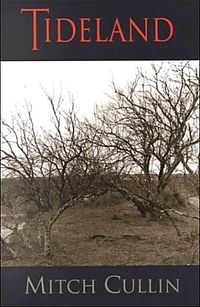 Welcome to the world of Jeliza-Rose, the young narrator of Mitch Cullin’s provocative novel, Tideland. And what exactly has brought Jeliza-Rose from Los Angeles to rural Texas? And why won’t her father talk to her anymore, preferring instead to gaze at the wall? And who is making all that racket in the attic? In a story which is at times suspenseful, darkly surreal, and often humorous, Jeliza-Rose drifts from the harsh reality of her childhood, escaping into the fantasies of her own active imagination where fireflies have names, bog men awaken at dusk, monster sharks swim down railroad tracks, and disembodied doll heads share in her adventures.
Set amongst grassy fields, alongside an abandoned quarry, in dim bedrooms and mesquite-shaded trails, Tideland illuminates those moments when the fantastic emerges from seemingly common occurrences and lives–and a lonely child discovers magic and danger behind even the most mundane of events.