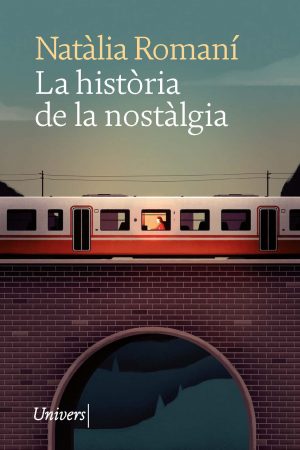 The History Of Nostalgia

The History Of Nostalgia is a sweeping tale of tales, characters and places. In many ways, it is a novel against love and lovers, against passion, against the loss of control and victimization, against those who give up and abandon the ship. With doses of David Hume, cevapcici, French fries and Trieste’s black coffee.

Natalia Romaní is a journalist from Barcelona that is travelling to New York. She comes across the neuropsychiatrist Michel Roux, who runs a residence in Humboldt, Iowa. From this serendipitous encounter, she is assigned a strange job: to write letters to the the daughter of one of his inmates: Laura Parker, who has not seen her mother for over thirty years.

At Pembroke University, Sarah Greenfield is professor David Goldman’s student, who, in turn, is a specialist in comparative literature and is married to Laura Parker. He is also the disciple of the legendary Patrick Gardner, a master of a whole generation of writers, including Jonatan Franzen. Professor and student will fall in love when they don’t want to, pushed by a passion they don’t understand, and engulfed in a whirlwind that they cannot stop.

Emilia Sobesky is Sarah Gardner's aunt and the one who commissions the letters to Natalia Romaní. Born in Berlin, she is a psychoanalyst and her father was killed by the Nazis in 1938. She will solve a problem that seemed unsolvable: how to avoid the catastrophe of passion through compassion.

In Trieste, Professor Claudio Magris drinks black coffee at the San Marco square, while squeezing olives in his hands. For years, Claudio Magris has maintained a close friendship with Patrick Gardner and, thanks to him, he will meet Sarah. Together they will tour the old heart of Europe with Stephan Jovovic, a Serb from Sarajevo, a former student of Magris and exiled inLondon during the Bosnian war. They will reach the Banat region in Serbian Vojvodina, following the Danube near Romania, until they reach Bela Crckva, which will be the end.

From Subotica in Serbia, to Park Slope in New York, Pembroke University in Massachusetts, London, Sarajevo and its war, the Trieste of Claudio Magris, Zagreb and its Museum of Broken Relationships, Iowa and its endless plains. Memories and more memories. The Shoah and Vienna before the Shoah. Inhabited with real characters and imaginary ones who are no less real, reality and fiction merge in personal diaries and interviews following one another to create this spool of thread that is someone’s and everyone’s life.

The History of Nostalgia is a river. Characters go in and out, they cross paths, they fall in love, they disappear, they travel afar and they come back. They write letters and they travel again. It is the travelling that will merge their stories and cross their paths, and travel with be also the thread of each and one of their stories that seek to show us our own vulnerabilities.

Shortlisted to the Catalan Booksellers Prize 2022

"A voice that has come to stay. Simply a wonderful book. " Paula Cifuentes, author of The Route of Storms and Times of Bastards

"A breath of fresh air in peninsular literature, which intertwines in a fascinating way the United States of Auster and the Central Europe of Sebald and Zweig." Andrés Prieto, Spanish translator of The History of Nostalgia

"It speaks of literature from the Iberian Peninsula to the Urals, the border of European identity and the prelude to the Tolstoyan genius, passing through Mitteleuropa." Mariagrazia Mazzitelli, editorial director of Salani and editor in Italian of The History of Nostalgia

"A beautiful book, overwhelmingly beautiful." Concita De Gregorio, author of It Seems Like It's Spring Outside

“It’s undoubtedly the most beautiful Catalan novel I ever read and it makes me feel protected by literature, it makes me feel part of a circle where I like to be. A novel that has links to the books and literary characters I love most, that dialogues with them.” Mariagrazia Mazzitelli, editor of Salani, Italy

"Nostalgia as the answer of the soul of the human being, of all times and cultures, to an inescapably uncertain future."
Lurdes Serramià i Fruns

«A monumental novel that intersects the lives of characters subject to different passions: culture, love, stability. A journey through the heart of Europe that tells us about history, blood, religion, humanism and redemption. At times it reminds Auster, it immerses us in the best Central European tradition. Old but contemporary, it challenges the reader and raises them high, in a dazzling literary exercise ».
Consuelo Jimenez

"If it is true that there is no better way of talking about a book than by quoting it, be careful with this novel, because it will control you and make you disappear." Pablo Martín Sánchez

"This is a book to escape reality and delve into its secrets, in order to enjoy each caress it gifts us." Libros que voy leyendo