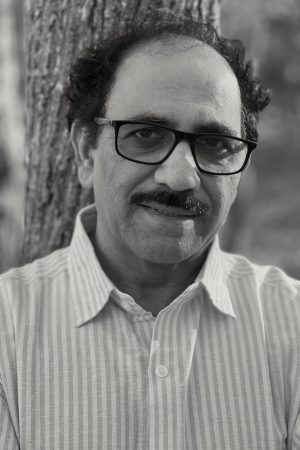 The Demon of One Hundred Mirrors

He sipped the tea from the mug cradled in his hands and looked out of the window, watching the raindrops catch the light from the streetlamps as they fell through the night sky. And like an orchestra conductor waits for the musicians to arrive and settle—the fretting flutist in the corner, the whispering violinists who came in late—Ananth waited for the memories to arrive. And they did. Faces pressed to train windows. Chocolate feet and pink soles. Touch-Me-Not blossoms touching noses. Seances with Anglo-Indian spirits. Yellow balloons and white boxes. Amma and Appa. Ajji, Chandru, Brinda, and Ronald. And Anju. And Fear-Bird. Yes, Fear-Bird and 1976. When it all began.

1976. Ananth Rao is eight years old and growing up in Bombay during the Emergency which is terrorizing people across India. But much closer to home tragedy strikes for Ananth and his family when his mother dies in Bangalore while giving birth to his baby sister, Anju. This is when the magico-real Fear-Bird first appears in Ananth’s life and he refuses to have anything to do with his small sister.

Eighteen years later, Ananth is a software engineer living in Philadelphia after studying computer science at Dartmouth College. Yet despite this sea change in his circumstances and his prestigious Ivy League education, Fear-Bird continues to haunt Ananth’s life, making him dread relationships, and, in particular, still distancing him from Anju, who adores him. Now, Fear-Bird also risks threatening his burgeoning romance with Tamika, an Afro-Cuban woman with her own history of escape from Fidel Castro’s Cuba. As Tamika, and Dan, Ananth’s gay Indian housemate, begin to open his mind and heart, Ananth, tormented by Fear-Bird, breaks up with Tamika. But shortly afterwards he learns that Anju has had a potentially fatal traffic accident, and rushes to Bangalore, wrapped in guilt and regret, fearing he will lose her too. After Anju’s successful surgery, Ananth realizes he has an opportunity to repair his relationship with her, with Tamika, and with the world at large, and finally exorcise Fear-Bird once and for all.