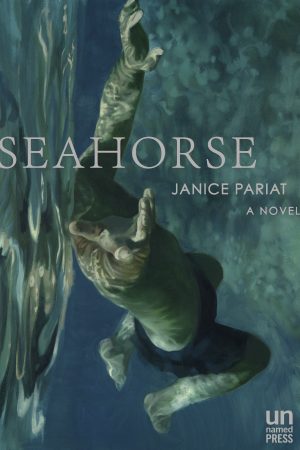 A sweeping tale of love, nostalgia, and memory, moving through 1990s New Delhi and present-day London, Seahorse tracks one man's undying love for his former professor across time and place.

The seahorse is the only creature where the male is responsible for reproduction. Male seahorses bear their burdens, as does our protagonist Nem, a hero driven by his decades-long love for Nicholas, whom he met at a University in 1990s Delhi. Nem was not like his classmates, crowding around a TV set to watch music videos and talk about "doing it"; instead he opted for lonely walks around ruins. On one of these occasions he spied Nicholas, an enigmatic young professor from London, in the park with another male student.

With surprising ease, Nem seduces the much sought-after professor. It is in the wake of this brief but steamy affair, when Nicholas returns to London and Nem tries to continue with his life, that the story truly begins. Nem graduates from university and becomes a successful art critic, but his memories of Nicholas dominate his existence. After an invitation to speak at a conference in London, Nem's obsession with Nicholas returns. Still single, Nem wonders if this will be the opportunity to reconnect with his old and influential lover.

Instead, Nem is immediately swept up in London's cosmopolitan world, hobnobbing with the city's diverse artists and writers and enjoying the London club scene. Meanwhile, Nicholas artfully avoids any direct contact with Nem, instead orchestrating a series of clues that lead to Myra, a woman Nem had believed to be Nicholas's sister. Brought together by their love for Nicholas, Nem and Myra begin a friendship with surprising consequences.

Employing skillful, immersive prose, Janice Pariat explores the notion of emotional memory with the inquisitive mind of a scientist and the prowess of a poet.

Shorlisted for The Hindu Prize 2015

«Philosophical without being ponderous, erudite without being show offish and unapologetically immersive, Seahorse affirms what Boats On Land had announced: Pariat is a major talent.» Mint

«Janice Pariat’s first novel has the piercing insight and linguistic felicity of her short fiction. It is an ardent and highly accomplished meditation on art, love and sexuality.» The Sunday Guardian