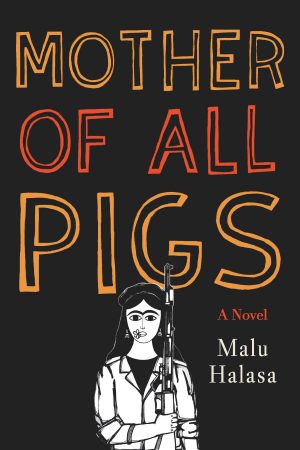 Mother of All Pigs

When Hussein Sabas, a retired Christian Jordanian army officer, decides to sideline as a butcher and starts selling the best pork chops in the Levant, trouble quickly ensures. Hussein runs his business with the help of his picaresque uncle from a town at the foot of Mount Nebo and lives in a household surrounded by women: his sister Samira, who joins a group of Syrian female activists searching for a way to escape her stifling home life; his wife Laila, a local English teacher in a Muslim-dominated government school; his conservative stepmother Fadhma, who harbors the family’s history and all its secrets; and a young newcomer to the scene, Muna, born to Hussein’s brother who emigrated to the US and led the way for the mass exodus of the family members from Jordan. Muna is American and also half Philipino, and quickly becomes friends with Samira.

As the story unfolds, Hussein’s clandestine pig farm, the arrival of a mysterious young soldier who once served under him and Samira’s secret political engagement force the novel to a bloody climax that is not without redemption. This is a story steeped in religion, exile and exodus, politics, intrigue, romance, nonsense and exotic animal husbandry. Like the Middle East, the weight of history and the burden of memory permeate Mother of All Pigs.

"Mother of All Pigs is a striking novel, and an unflinching yet loving depiction of the Middle East. It dissolves stereotypes while offering a satisfying story of a region, a country and one family." Times Literary Suplement

"Malu Halasa’s brilliant and gripping novel gave me a better sense of the vivid complexity of contemporary life in the Middle East than anything else I’ve read. Written at the intersection of all the big contemporary conversations - about kinship, politics, ethnicity, religion, gender and morality - it nonetheless remains intimate and engaging."—Brian Eno

"Halasa's prose is revelatory. Wholly authentic and profoundly insightful, Mother of all Pigs is a captivating look at the lives of a Middle Eastern family."—Foreword Reviews, Starred Review

"Halasa juggles multiple narrative threads in her lively debut... the story wins high marks for its affectionate and raucous portrayal of one Jordanian family in the midst of social and political upheaval."—Poornima Apte, Booklist

"Halasa’s sharp critiques and deadpan humor make for a captivating exploration of the intricacies of the modern Middle East." —Publishers Weekly