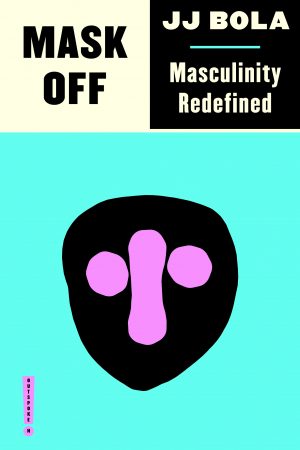 What is masculinity? Dominating the world around us, from Trump's twitter outbursts to deadly gun violence, from male suicide rates to incels on Reddit and 4chan, masculinity is perceived to be 'toxic', 'fragile' and 'in crisis'.

In Mask Off, JJ Bola exposes masculinity as a performance that men are socially conditioned into. Using examples of non-Western cultural traditions, music and sport, he shines light on historical narratives around manhood, debunking popular myths along the way. He explores how LGBTQ men, men of colour, and male refugees experience masculinity in diverse ways, revealing its fluidity, how it's strengthened and weakened by different political contexts, such as the patriarchy or the far-right, and perceived differently by those around them.

At the heart of love and sex, the political stage, competitive sports, gang culture, and mental health issues, lies masculinity: Mask Off is an urgent call to unravel masculinity and redefine it.

"JJ Bola’s contribution is unusual … [he] insists the only solution is to dismantle the entire concept of maleness as we have hitherto known it and replace it with a masculinity that sees the necessity of the equality of genders for it to not only survive, but to thrive." Houman Barekat, The Guardian