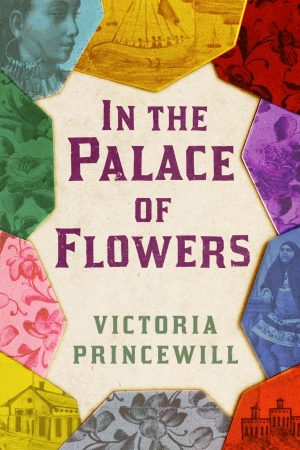 In The Palace of Flowers

Sex and friendship, ambition and political intrigue, secrets and betrayal will set the fate of two slaves— Jamīla and Abimelech—in this ground-breaking debut novel.

Inspired by the only existing first-person narrative of an Abyssinian slave in Iran, Jamīla Habashī, In the Palace of Flowers recreates the opulent Persian royal court of the Qajars at the end of the nineteenth century. This is a precarious time of growing public dissent, foreign interference from the Russians and British, and the problem of an aging ruler and his unsuitable heir.

Torn away from their families, Jamila, a concubine, and Abimelech, a eunuch, now serve at the whims of the royal family, only too aware of their own insignificance in the eyes of their masters. Abimelech and Jamila’s quest to take control over their lives and find meaning leads to them navigating the dangerous politics of the royal court, and to the radicals that lie beyond its walls.

Richly textured and elegantly written, at its heart In The Palace of Flowers is a novel about the fear of being forgotten.

"In centering the life of an African woman in history, Victoria Princewil's In The Palace Of Flowers speaks to novels like Petina Gappah's Out of Darkness, Shining Light and Maaza Mengiste's Shadow King. Novels like these show us what is missing in classic historical fiction like Things fall Apart, but most importantly, they confirm what we've always believed: that African women are active agents of history." Ainehi Edoro

"I truly enjoyed reading this book. It is rich in both the language of the Persian court and sensory description, meaning I felt like I was being transported in a way I could feel and hear. Princewill was artful in her explanation of some of the unfamiliar names and titles, weaving translations into the text in a way that meant I understood without needing to be explicitly told." Books in Steel City

"A deft and skillful literary reclamation, In the Palace of Flowers gives dignity and complexity to the experiences of those all too often confined to footnotes in history." Elnathan John

AnOther Magazine, 18 Books by Black British Writers to Read Now

“Jamila and Abimelech, two Abyssinian slaves in the Shah’s palace in 19th Century Persia, appear better-off than most in their station: they can read and debate the classic and popular literature of their time; they can even dream of being socially mobile. And yet, beneath the surrounding grandeur and opulence, they both brim with deep longing for something different – to be remembered or to exist beyond the palace and its petty squabbles. A book that is both decadent and intimate, In The Palace of Flowers opened up a part of history I knew nothing about and will stay with me for a very long time.” Ayesha Harruna Attah, author of Hundred Wells of Salaga and The Deep Blue Between

“Through beautiful prose the hugely gifted Victoria Princewill transports us to another time and world, telling a story which has one wholly absorbed. Love, danger, politics, history and art, In The Palace of Flowers is a sweepingly stunning tale that has it all.” Samira Salwani, Journalist

"Transporting us flawlessly to another time and world, this tells the story of two Abyssinian slaves as they navigate the politics, mysteries and drama of the royal court in Iran in the 1890s." The Continent & Mail and Guardian

“With captivating storytelling skills and impressive historical knowledge, Victoria Princewill has written an awe-inspiring, dynamic and powerful novel about a part of African history that few other writers have told. In giving voice to Jamila Habashi, whose first person account is the only existing account of an Abyssinian slave in 19th c Iran, In The Palace of Flowers is both restorative and illuminating while gripping the reader’s mind with vivid and seductive language.” Minna Salami, author of Sensuous Knowledge: A Black Feminist Approach for Everyone